Judas Priest singer Rob Halford is celebrating quite a milestone as today is the 32nd year anniversary of him being clean and sober. 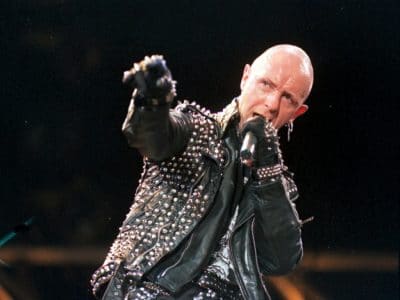 “maniacs today is my 32nd year of being clean and sober.one day at a time.each one of you are in my life and your love and support encourages and helps me to live in the moment and try to do my best for you. thank you all. ??????power — with Rob Halford.”

In an interview a few years earlier with Jeb Wright for Classic Rock Revisited, Halford spoke about why he became clean and sober back on January 6, 1986: “I was sick and tired of feeling sick and tired. I was sick of waking up every morning and feeling like shit. I think I came to an understanding that I wasn’t giving at my full capacity. I wasn’t able to give to my full ability because it was being held in place by booze and drugs.”

In terms of doing his first show sober, Halford stated: “I will always remember the first show I did clean and sober. It was one of the most amazing shows I had ever done. It was in New Mexico, in Albuquerque. I literally felt elevated as everything was coming with such clarity. I was able to really listen to, and love, and enjoy the performance of Judas Priest without having all of the other things in front of it. Since that day it has been a miracle.

It is good that we’re talking about this. Everybody has to face things in their lives at some point. It can not only be booze and drugs, it can be anything. You can eat too much, or you can not exercise, or whatever. I think the most important thing we need to be pushing in rock and roll and staying clean and sober is that you have to be a very strong person to do that. It is not easy staying clean and sober in rock and roll. There are temptations galore from the moment you wake up to the moment you go to sleep, especially when you’re on the road. I think we’re some of the strongest people, my friends, like yourself, and my other sober brothers in Metal. We are way stronger now than we used to be. We are giving the best of ourselves now, more than we ever could before. I think that is the blessing of being sober.”

Halford was also asked whether it was a moment of redemption when he came back to Judas Priest sober. The singer stated: “For a lot of people in life, you just figure that maybe you want something different in life so you go down the street and turn left and see what happens. That is what I did. I enjoyed it and it was very fulfilling, and I still have ambitions in that respect left to complete. However, what I did discover when I was away from Priest, was that Priest really had given me everything that I really needed and wanted as a musician. It took a while for me to kind of make that journey back…for lots of different reasons. When I did come back, I loved the Priest tenfold and I couldn’t wait to get back in the studio with Angel of Retribution. I couldn’t wait to get back on stage with a band that I believe completes me.”

Judas Priest will be releasing their 18th studio album entitled Firepower on March 23, 2018 and they have just released a video for the track “Lightning Strike.”