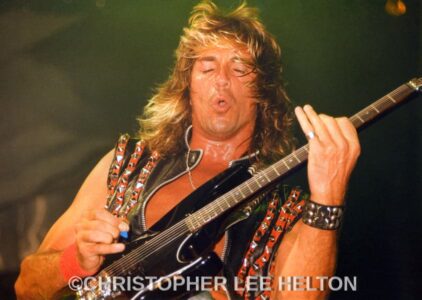 The band has recently resumed its 50th Heavy Metal Years / Anniversary Tour now that guitarist Richie Faulkner has recovered from his emergency heart surgery back in September 2021. The Judas Priest line-up also consists of Rob Halford on lead vocals, Ian Hill on bass and Scott Travis on drums.

Tipton was asked whether Judas Priest will be inviting any special guests (presumably such as former Priest guitarist K.K. Downing) to perform with them on stage for some of the higher-profile, or historic gigs of their 50th Anniversary Tour to which the guitarist succinctly replied: “No, we’ve got no plans to.”

In regard to what he is most proud of in terms of both his own accomplishments and the band’s accomplishments, Tipton indicated: “I’m most proud of the fact that during our career we have written some great heavy metal songs,  which have become classics, and the fact that we have inspired so many bands. Many shows throughout the years were very special to us, the US Festival, and particularly, Live Aid to mention just two.”

In terms of the significance and legacy of Judas Priest in his eyes, Tipton stated: “We have always flown the flag for heavy metal, and we believe that it can be what you want it to be. Rob has very often introduced songs on stage as, “Judas Priest style heavy metal,” which sums it up as they range from titles like “Last Rose of Summer” to “Killing Machine.” The legacy that we will leave behind is that we have widened the horizons of what is acceptable in heavy metal.”

You can read the rest of the interview with Glenn Tipton at Vinyl Writer Music‘s website.