History was made yesterday night (on November 5, 2022) when Judas Priest consisting of current band members — lead vocalist Rob Halford, bassist Ian Hill, guitarist Glenn Tipton and Richie Faulkner, and drummer Scott Travis — along with guitarist K.K. Downing, and drummers Les Binks and the late Dave Holland, were inducted into the Rock and Roll Hall of Fame at the Microsoft Theater in Los Angeles, California, USA. 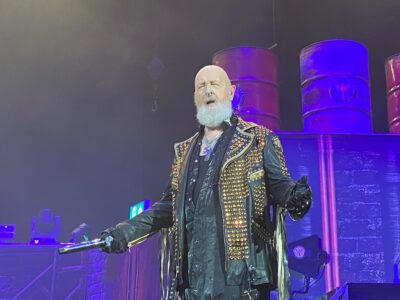 The current Judas Priest members along with Downing and Binks also performed a medley of three songs consisting of “You’ve Got Another Thing Comin'”, “Breaking The Law” and “Living After Midnight.”

Unlike many other hard rock and heavy metal bands that have been inducted into the Rock and Roll Hall of Fame, current and past Judas Priest band members were able to put their differences aside to reunite on stage for a special live performance. That wasn’t the case for groups such as Guns N’ Roses, Van Halen or KISS who were either missing key band members at the ceremony or did not bother performing live at the event.