Heavy metal veteran rockers Judas Priest have unveiled a lyric video for their single “Breaking The Law” which first appeared on their British Steel album that was released back on April 14, 1980. 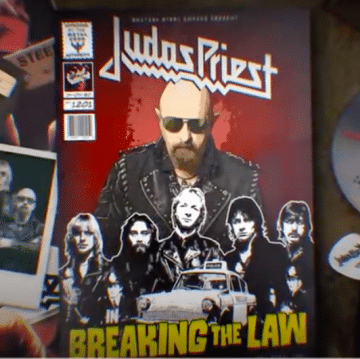 Sleaze Roxx stated the following in its retro review of British Steel:

“The first time I actually saw Priest on television was seeing the music video for the next song “Breaking The Law.” The bass playing of Ian Hill carries this tune, and has Halford singing at a lower range than that of his signature wailing. This shows the depth of Halford‘s vocal range. Keep in mind, I was not into heavy metal when this release came out, and the most “heavy” music I was listening to was KISS and the glam bands of the 1980s.

It wasn’t until later I started listening to Priest albums, as opposed to the radio played songs. “Breaking The Law” was the first encounter I had with the band due to the video, but I did not run out and buy the record, nor did I pay much attention to them because the song was not on my local radio station. The song has become a standard metal classic, and still holds up decades later. Many people who are not familiar with the band know the song, due to television commercials or can recognize the song when told the title, which shows its staying power throughout the years.”