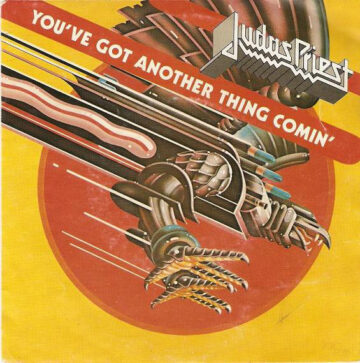 Heavy metal veteran rockers Judas Priest have unveiled a lyric video for arguably their most popular single “You’ve Got Another Thing Coming” from their album Screaming From Vengeance, which was released more than 39 years ago on August 6, 1982.

Wikipedia states the following in part about the song (with slight edits):

“”You’ve Got Another Thing Comin'” is a song by English heavy metal band Judas Priest. It was originally released on their 1982 album Screaming for Vengeance and released as a single later that year. In May 2006, VH1 ranked it fifth on their list of the 40 Greatest Metal Songs. It became one of Judas Priest‘s signature songs along with “Electric Eye” and “Breaking the Law”, and a staple of the band’s live performances. “You’ve Got Another Thing Comin” was first performed on the opening concert of the Vengeance World Tour at the Stabler Center in Bethlehem, Pennsylvania, on 26 August 1982 and had been played a total of 673 times through the 2012 Epitaph Tour.

The song reached No. 67 on the Billboard Hot 100 chart, making it Judas Priest‘s only song to make that chart. The song is written in the key of F-sharp minor.”