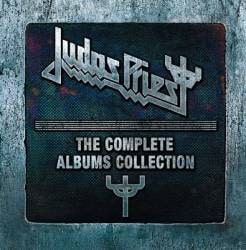 Few heavy metal artists have built as stellar a discography as Judas Priest. Now fans will have the chance to purchase a box set which includes all 17 studio and live albums Judas Priest recorded with the classic line-up of Rob Halford, Glenn Tipton, K.K. Downing and Ian Hill.

Judas Priest’s ‘The Complete Albums Collection’ will be available exclusively through Popmarket.com starting January 24, 2012. The box set is released by Columbia/Epic/Legacy, divisions of Sony Music Entertainment.

Included will be brand-new remasters of Judas Priest’s first two albums, 1974’s ‘Rocka Rolla’ and 1976’s ‘Sad Wings of Destiny’ (which have never been released before as authorized remasters by the band). The 2009 live compilation, ‘A Touch of Evil… Live,’ features in the box set but it is the only compilation that appears in ‘The Complete Albums Collection.’

Each of the 17 individual albums will be packaged in replica mini-LP sleeves that reproduce their original cover art. The set is completed by a new 40-page booklet with photos, album credits, and liner notes by rock journalist/Priest fan Greg Prato.