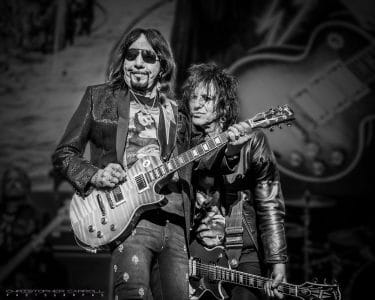 While exiting the courthouse, Frehley was interviewed and stated as follows (as transcribed by Sleaze Roxx):

“It was a tense moment you know. I’ve been on pins and needles for months you know. I’ve been taking care of my daughter because she was sick and I realized that my relationship with Rachel was over. She didn’t want to accept it so she used a temporary restraining order as a ploy to try to get all my belongings and it didn’t work. I have the greatest attorney [hugging his giggling attorney Jennifer Goldman] in San Diego right here.”

Adan had previously interviewed Gordon for NBC San Diego during which Frehley‘s former girlfriend indicated (as transcribed by Sleaze Roxx): “And all of a sudden, he is turning around and saying, ‘If you say one single word, it will be the last thing you ever do.” Gordon continued: “And [we] have been inseparable [for 11 years], completely inseparable since then.” Gordon added: “And they started grabbing his guitars. I said, ‘What’s going on?’ He wouldn’t look at me. They started grabbing his gold records off the walls. I said, ‘What is happening? What’s going on here? I thought that you were coming home. I though you were tired. What…’ You know, no one… Then, they started yelling and screaming at me.”

Adan also interviewed Frehley‘s attorney Jennifer Goldman who indicated (as transcribed by Sleaze Roxx): “Ms. Gordon claims that it was an ambush, that Mr. Frehley brushed by her and that was just never the case. Mr. Frehley wants nothing to do with her. They had broken up previously and she was scorned.”