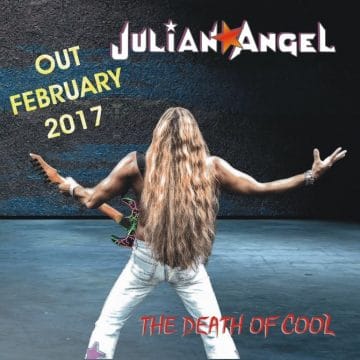 Beautiful Beast frontman and lead guitarist Julian Angel is back with a new solo album entitled The Death Of Cool, which will be released in February 2017.

The following message was posted in part on Angels‘ Facebook page earlier today:

“I proudly announce the release of my new solo album “The Death Of Cool” in February 2017. Expect 80s Hard Rock as always 🙂 November 29 I will hit you with a new video for a song named “Reach”. Stay tuned and have a great day !!!…”

Sleaze Roxx stated the following in its review of the album Kick Down The Barricades from Julien Angel’s Beautiful Beast in early 2014: “Julian Angel and company are playing with a fervor fueled by good ol’ fashion ’80s hard rock that is only eclipsed by the frontman’s passion for all things ’80’s. Angel states he and his mates are “Hair Metal Traditionalists” and it certainly rings true here with the album’s title track, “Shock ‘Em Dead” and “Unsexy”. Beautiful Beast are not only paying homage to many bands from that lost era, but breathe new life into a genre that is looking for a new chairman of the board — and I know we’ve found him in Julian Angel.”

From the 2014 album ‘Kick Down The Barricades’. Get this and Julian Angel’s new album “The Death Of Cool” here: Demon Doll Records: http://bit.ly/2qncfIQMus…