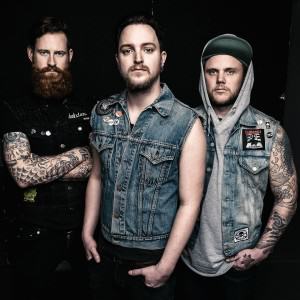 Junkstars are a punk rock/glam rock band emanating from Sweden comprised of Max “Max” Malmquist (vocals, guitar), Tobbe “Bronxen” Ljungqvist (bass, background vocals) and Mathias “Matte” Wanneberg (drums). The group has already released two albums, With A Twist Of Lemon (2012) and French Hot Dog (2013), and their third album, This Means War, has been released in Sweden and on Spotify and is scheduled to be released in the rest of the world on November 6, 2015 via Despotz Records.

“Scandinavia’s newest punk fueled rock heroes, Junkstars, release their new single, “Snakebites,” through Despotz Records on 6 November. Jumping out of your player with enough velocity to peel your skin off of your face, the doom laden lyrics reflect what the planet is heading for if we don’t take care of it. The band says, “it’s actually a horror-sci-fi inspired song about peace on Earth and what we do with our planet. The metaphor is that if we continue to destroy our world the snakes will come kill us, take over and live in our homes. We have to prevent this from happening.” “Snakebites” is taken from the band’s upcoming This is War album, set for release on 16 October via Despotz. The trio are also gearing up for a European tour with Swedish punk metal legends Backyard Babies. The tour kicks off on 5 November at the Markthalle in Hamburg and concludes at Islington Academy in London on 25 November.”