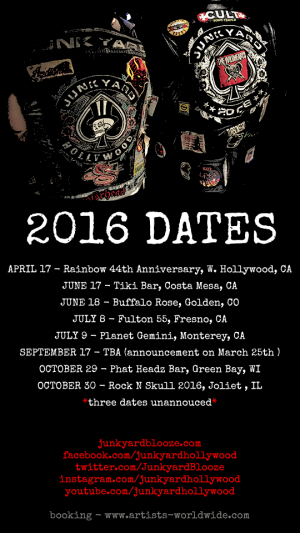 Sleaze rockers Junkyard have released dates for eight 2016 gigs in the US and details for seven of them with three more dates to be announced in the future. The group’s various tour stops include the Rainbow’s 44th Anniversary celebration in West Hollywood, California, USA on April 17, 2016 and an appearance on day three of the Rock N Skull Festival being held in Joliet, Illinois, USA from October 28 to 20, 2016.

Back in August 2015, Junkyard released their first video in over 24 years for the song “Faded.”

Back in 2012, Sleaze Roxx reviewed Sixes, Sevens & Nines and stated: “It’s been years since I last listened to Junkyard’s Sixes, Sevens & Nines, so I was looking forward to revisiting the album courtesy of a Bad Reputation ‘Collector Reissue’. This release faltered back in 1991, and in hindsight you can understand why — whereas Junkyard‘s self-titled debut was a high-energy sleaze fest, this sophomore effort was far more laid-back in its approach.” Sleaze Roxx concluded in its review: “If Junkyard‘s 1989 debut was the sound of a cantankerous band nursing a wicked hangover, Sixes, Sevens & Nines was the relaxing drink-a-thon that caused the next morning’s pissy attitude. It’s a shame this record was overlooked when it first arrived because it is a great effort. Maybe it was too ‘nice’ for some fans who were awaiting a “Blooze” rehash, but overall it was very satisfying — and still is some twenty years later!”