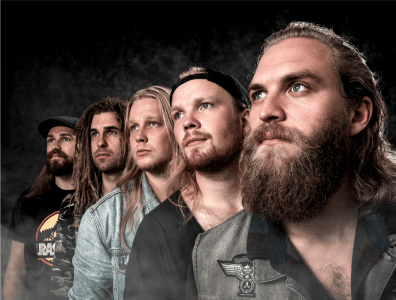 “Denmark’s hard rock high-hopes Junkyard Drive release new single and official video today, for the new song “Home”. Produced and mixed by Soren Andersen / Medley Studio, “Home” is a song that reflects on the feeling of feeling at home.

“In a world where everyone is judging and telling you what to do and not to do, we can in some cases find it hard to find out who we really are”, the band states. “In the song, we follow someone who has an urge to change his life to eventually find balance, but realizes that, in order to find peace, one must look inward and not let others define where you belong”….

Junkyard Drive is leaving their own ”home” right after the release of the single ”Home,” as they embark on a four weeks intensive European tour in October / November with Swedish rockers Eclipse!”

Sleaze Roxx stated the following in its review of Junkyard Drive‘s last studio album Black Coffee: “There’s an old adage that says it takes a band its entire lifetime to write its first record, and then the “sophomore slump” happens because of restricted timelines, touring schedules and outside creative pressures. It is true that Black Coffee is progressively different from Sin & Tonic but that surely does not reduce the quality of this new album or suggest a “slump” by any means.  Find out for yourself and give it a chance, you may get your own caffeine rush out of it.”

“Home” is out on all digital platforms 18/10-19 through Mighty Music.Video by William Findinge & Emil DalsagerSong recorded at Black Tornado.Mixed and masted…