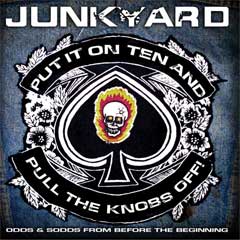 Junkyard has just released a CD entitled Put It On Ten And Pull The Knobs Off. The new CD features all 19 songs that the band recorded to get signed to Geffen in 1987 plus 4 great covers. You can order the CD at Junkyard’s revamped website, junkyardblooze.com, which also offers other CDs and DVDs for purchase.

On the website the band states, “The Tulsa OK, and Austin TX shows were a blast! It was great to have Brian along for the ride, and as usual all of the die-hard Junkyard fans pushed the party into overdrive. Any of you guys who have pictures or video of the shows please send it our way. We are working on a bulletin board and media page to showcase the stuff you send us from each show, but in the mean time just send anything you might wanna share in an email to pictures@junkyardblooze.com

Spain is a go! We’re still adding shows so keep checking back!”