Today is the 28th year anniversary of the release of Junkyard‘s sophomore studio album Sixes, Sevens & Nines, and the band weighed in on this moment. 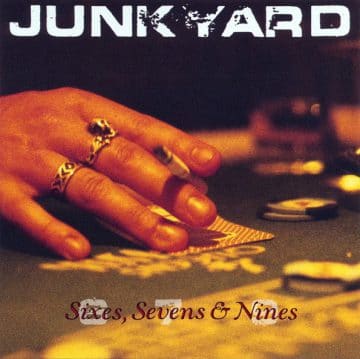 The lead single, “All The Time In The World”, made it to #24 on the Billboard US Main Rock charts and was on heavy rotation at MTV.

“Misery Loves Company” (directed by Mark Racco) was another single/video that was shot while we were on the tour supporting Lynyrd Skynyrd on their 1991 appropriately titled comeback release “1991.”

We also collaborated with master tunesmith Steve Earle on the single “Slipping’ Away.”

This review by John Franck pretty much sums it up:

Junkyard‘s 1991 sophomore release, “Sixes, Sevens & Nines” is head and shoulders above the band’s self-titled debut. Unlike Junkyard, “Sixes, Sevens & Nines” benefits from a punchy Ed Stasium production and mix that captures the band in all its ragged glory. If Junkyard’s sound wasn’t defined on its freshman outing, the band veers into full-on Lynyrd Skynyrd/AC/DC territory on this baby.”

Sleaze Roxx stated the following in its review of Sixes, Sevens & Nines: “If Junkyard‘s 1989 debut was the sound of a cantankerous band nursing a wicked hangover, Sixes, Sevens & Nines was the relaxing drink-a-thon that caused the next morning’s pissy attitude. It’s a shame this record was overlooked when it first arrived because it is a great effort. Maybe it was too ‘nice’ for some fans who were awaiting a “Blooze” rehash, but overall it was very satisfying — and still is some twenty years later!”

Junkyard‘s “All The Time In The World” video:

Junkyard “All The Time in the World”