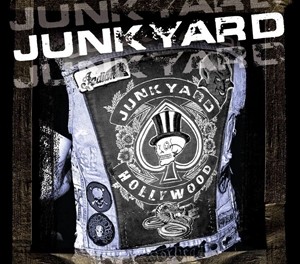 Junkyard’s new single, “Faded”, and its b-side “The River”, is now available for purchase at Amazon and iTunes.  Produced, engineered and mixed by Davey Warsop (Alkaline Trio, Bad Religion, Foo Fighters),  the two song single was released digitally on the Unison Music label with a 7″ vinyl version to surface on September 11th.

As well as preparing a long-awaited full-length record to be released in 2016, Junkyard are booking high profile shows in the U.S. for summer 2015 and 2016 and a tour of Spain is scheduled for the fall.  The band currently consists of long-time members David Roach  (vocals),  Brian Baker (guitar), Todd Muscat (bass) and Patrick Muzingo  (drums),  alongside newest member Tim Mosher (guitar).

What happens when two punk rock veterans meet in Austin, Texas and, with a roll of the dice, decide to head west to Los Angeles? The birth of Junkyard, a band with a sound like Godzilla in a foul mood tanked up on cheap wine. Junkyard built on this reputation in the sweaty, beer-soaked dive bars of East Hollywood. Soon the band was packing them in like sardines, attracting the attention of major record labels. The band’s self-titled debut was released in 1989 (on Geffen Records) to significant acclaim. Both its singles, “Hollywood” and “Simple Man,” received major MTV airplay, with “Simple Man” hitting #47 on the Billboard rock chart. It garnered rave reviews, capturing four stars from Rolling Stone.

In 1991, Junkyard released its sophomore album, Sixes, Sevens and Nines. Produced by Ed Stasium (Motorhead, The Ramones), the album featured songwriting collaboration with country legend Steve Earle (“Slippin’ Away”). Sixes, Sevens and Nines ushered in a new era for Junkyard, with a tour in England opening for The Almighty, then ultimately a North American arena tour with the legendary Lynyrd Skynyrd.

Junkyard, a hard rock band formed in LA in 1989, never really got the recognition they deserved. After a short-lived career, they disbanded by 1992. ‘Hollywo…