K.K. Downing feels we’ll never see the classic decades of music that we know and love

Former Judas Priest and current K.K.’s Priest guitarist K.K. Downing was recently interviewed by Shelley Harris for KNAC. Downing was promoting KK’s Priest‘s debut album Sermons of The Sinner, which will be released via Explorer1 Music Group/EX1 Records on August 20, 2021. 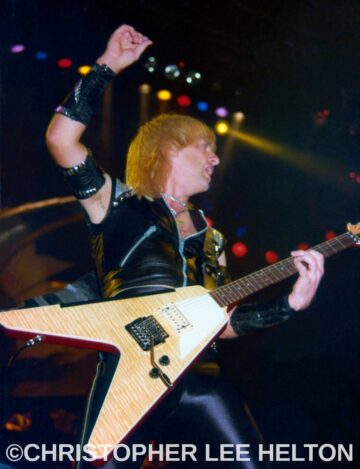 In terms of his own story, Downing indicated (with slight edits): “Yeah, it’s a unique story, really. That’s why I say I feel fortunate to be born exactly when I was. Just when it was all happening, I was around that age – 12, 13, 14 – so I was there for the evolution of everything [in Rock ‘n’ Roll], you know. So, it became so important to me; I’m a part of it, and it’s a part of me. And I do feel totally dedicated, because, as I say in the book, Shelly, it basically saved me from being whatever else I might have been – some kind of mad criminal delinquent, or whatever! Music is my salvation, so I owe it a lot, and it owes a lot to a lot of other people just like me – the fans of the music that we love. And it’s a wonderful story.

And that is the whole – not hidden meaning – but it’s the subject and meaning behind Sermons of The Sinner. The title song is about that … It says in the song, “Time is running out for us – things may never be the same, but the sermons of the sinner, they can help us rise again.” In other words, the music that we know from that time span, say from the mid-sixties to 1990, for example, that short window, and even further … I just mentioned 1990 because metal itself changed into different genres of metal – but the classic decades that we know and love so well, we’ll never see the likes of again. So, it’s kind of like a heads up, because some of us – us – we’re losing friends now on a too-often basis, and I guess that will accelerate at some point to extinction. But, while I’m here, and we’re here, we can still produce and keep this music alive. That’s what this album is all about. I know that’s a huge, massive statement – isn’t it really? But, I feel duty-bound to give a heads-up and say, “Hey guys, whatever’s left, it’s still there, enjoy it and be a part of it….Heed the warning.””

You can read the rest of the interview with K.K. Downing at KNAC‘s website.