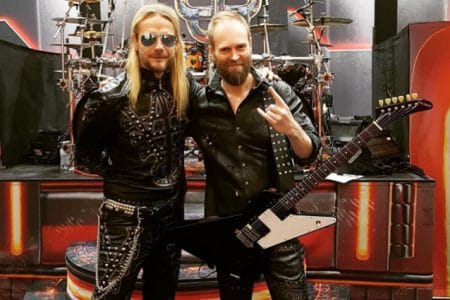 Downing replied: “Totally unfair. People come and go in bands. Rob left for 14 years and came back to the band. Even today I’ve still been in Judas Priest longer than Rob. I was in the band three years before he joined. Andy does look out of place. I would imagine he’s going to go back to producing.”

In terms of whether he has any contact with anyone at Judas Priest, Downing revealed: “None. They don’t respond to any of my correspondence. Glenn is always the one that controls the behinds the scenes with Jane from management. It’s a bit like a John Lennon/Yoko syndrome.

Andy and Richie are on a wage. They’re not really part of Judas Priest. The band is Judas Priest Music. I’m 25% shareholder and Director of that company. It’s a bit of a mess, really.”

You can read the rest of the interview with K.K. Downing at All That Shreds.