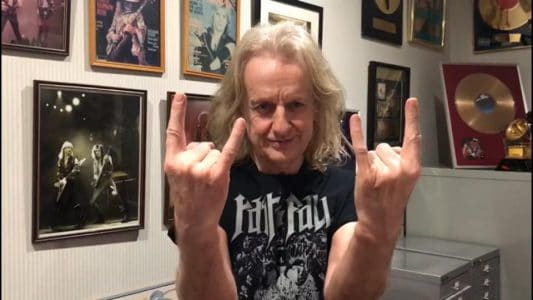 Downing replied: “I can’t say it’s overly sweet at the moment. Nothing lasts forever. I started in the late 60s, so certainly guys from that time, we’re not going to be around forever. Obviously, we’re losing a lot of good friends along the way. It is the way it is. For my own part, there is always a better way, and I always believe that democracy is the epitome of the way forward for everyone. That’s all that needs to happen. But, it’s a case of someone always wants a bigger share of the pie or whatever it is. It is what it is. I’m busy — I’ve relocated home, and I haven’t even started putting my music room back together yet, but I’m going to do it, because the scorching summer is gone now I think, and we’ve got plenty of rain now. So, I will have plenty of time to put that together and get up there.”

On whether he would consider rejoining Judas Priest, Downing advised: “There was an opportunity not long back, and that was passed on. So, another year goes by. I’m going to be 67 this October. At the moment, I’m in good healthy shape and fit. I really don’t know, I guess. Before, I wasn’t asked, but if I would have been asked, it probably would have been depending on how I was asked, really, and how it was going to be going forward. And that would still be the same in the future. At the moment, I understand that guys are out there and just started a leg with Deep Purple in the States, and they’re doing well — they have achieved some good things with a new record. I can’t really foresee that there would be another opening, so I guess it would be all too late. But if something did happen, I would have to see how the land lays at that particular point.”

You can read the rest of the interview with Downing at Vintage Rock.