Roberts spoke about what led him to depart the music industry in the first place and the status of his deal with Frontiers Music Srl, with which he released his solo album A New Normal back in January 2019.

“I’m trying to wrap my around why I would do that. See, my view of things is I love recording at this point. I love doing videos. I have three more coming out and it’s based on the record. My situation with Frontiers is over. It was a one record deal, so they’re not even promoting the record. So my point is that I don’t look at this – like when I left the music industry before and just went off the grid for 100 years, it’s because of the music industry. The way it functions. The way it works. It’s, first of all, even the people that are pulling down serious money off of it and I’m not talking about artists. I’m talking about the record companies – and by the way, the record companies are all fine, you know because when the CD sales went away, it’s like any sort of shift in technology or business, the really smart guys took advantage of it, so they don’t have to print anything anymore. They don’t have to print CDs anymore.

Then they said, “Okay, we don’t need as much staff!” So they fired you know, hundreds and hundreds of people and you know because the way the industry is, “I’m sorry we can’t finance a tour! You know you’re going to have to finance it yourself!” In other words, they’re making, their profit level is still, you know, putting serious money into the pockets of the people that own these companies, the people that run them and stuff like that. They’re still a lot of big paycheques going on. It’s just not going to musicians unless you’re in that sort of upper echelon. But you can see, even now, bands like, unbelievably fantastic bands like me, uh, no I’m kidding. That was a joke.

I know, but like Mötley Crüe and bands like that. They’re touring. Poison, Alice [Cooper], Arch Enemy – you know what’s the name of that band? Uh, Volbeat. Bands like that. The way they make the most out of their money is not necessarily YouTube views and it’s not neccesarily sales or records, or streaming. It’s with live shows. So I personally, because I was gone so long, I think I had taken myself out of that realm. In other words, if I said I want to tour, well, I would have to spend a couple of years, you know, playing in front of ten people in clubs.” 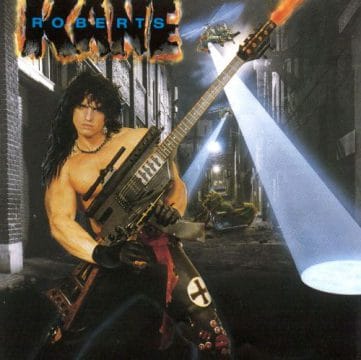 You can to the interview with Kane Roberts by Tyson Briden for the Non-Stop Rock Talk with Tyson Briden on Buzz Sprout’s website.

Wikipedia states the following in part about Roberts‘ music career (with slight edits):

“Roberts was the guitarist who played on Alice Cooper‘s Constrictor and Raise Your Fist And Yell and their respective tours. He is the man responsible for Alice‘s metal years in the late 1980s, as he co-wrote nearly every track from those albums. Just by being on stage, he was a part of the show with his huge physique and rocket shooting guitars.

After Raise Your Fist And Yell, Roberts released his first solo album, Kane Roberts, which featured Cooper‘s lyrics on “Full Pull.” He then guested on Cooper‘s 1989 Trash album, playing guitar on “Bed of Nails,” which he co-wrote. Two years later, he released a second solo album, Saints And Sinners, which contained the Bon Jovi-penned “Does Anybody Really Fall in Love Anymore?”, previously recorded by Cher as well….

Roberts took a long hiatus from music after his second solo album, but returned in 1999 with a band called Phoenix Down, named for a life potion in the video game franchise Final Fantasy. Phoenix Down recorded only one album, entitled Under A Wild Sky. Fans of both say that much of the record is inspired by the seventh game in the series, one of Roberts‘ favorite games.

After several years away from the music industry, working in graphic arts and as a video game programmer, Roberts began work on a new album, Touched, in 2006.

On October 23, 2011, Roberts performed with Talon at Firefest VIII, marking his first live performance in over twenty years. In 2012, Roberts released Unsung Radio, a collection of previously unreleased tracks. In 2016, Roberts featured on a track for the Northern Ireland-based hard rock outfit, Maverick. The track and video (also featuring Kane) for “Asylum” also included Jakob Samuel from Sweden’s The Poodles.