Former Europe and current Out of This World guitarist Kee Marcello was recently interviewed by Andrew Daly for Vinyl Writer Music. The guitarist was promoting his new band Out of This World, which just released its debut self-titled album along with a live record titled Live From The Heat back on April 2, 2021. 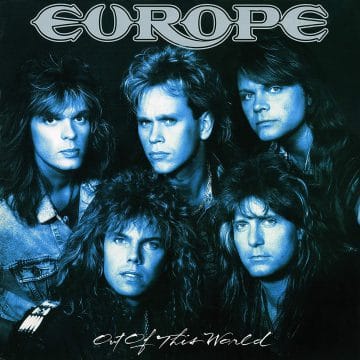 Marcello replaced guitarist John Norum in Europe just as The Final Countdown single and album were starting make waves all around the world. Marcello went on to record two studio albums with Europe — Out of This World (1988) and Prisoners In Paradise (1991).

In terms of the recording of the album Out of This World, Marcello indicated (with slight edits): “After The Final Countdown World Tour, I went to reside in the Bahamas. I’d been to Miami and bought a home studio, and I was now writing and recording demos for the coming album in my townhouse on Nassau Beach Road, while [Joey] Tempest was doing the same in Stockholm. A couple of months before the recordings, we’d met up with the amazing producer Ron Nevison in Denmark to visit at PUK Studios, where we originally intended to record the album. The studio facilities were great, but it was located in the middle of nowhere, and we just felt that it wasn’t going to work out for us.

We all met up in London for rehearsals before entering Olympic Studios in Barnes for the recordings. The first day in the studio, Ron presented a demo of a song written especially for us by Diane Warren, one of the most successful songwriters in the world. Nevison, being a “song man,” was notorious for plugging hit songs for bands that he produced, which he’d demonstrated brilliantly with many acts, most recently when he’d come up with both mega-hits “Alone” and “These Dreams” for Heart, whom he’d produced two very successful albums with. Ron plugged the tape in, and we all listened back to the song, and I was completely blown away! “What a super hit!” I burst out. Although the demo recording was basic, I could already hear Joey’s voice and my guitars on it. It turns out everyone in the band was excited – except Tempest, who looked almost insulted. “Europe isn’t a cover band,” he muttered. And that was that. Once Europe’s manager, Thomas Erdtman sided with him (which he always did), him and Joey outvoted the other four band members. This is when I realized that Erdtman really wasn’t Europe’s manager. He was Tempest’s. The song was called “Look Away.”

After finishing Out Of This World, Ron Nevison’s next producing mission was Chicago, which had lost their lead vocalist Peter Cetera a couple of years earlier when he embarked on a solo career. Although they had replaced him with great vocalist Bill Champlin, the word in the music business was that they would have problems reaching the heights of the Cetera, era. Since we’d declined recording “Look Away”, Nevison now offered it to Chicago, who recorded it and got a #1 hit on Billboard’s Hot 100 chart! Not only was it a smash hit, it actually became bigger than all the other hits Chicago had with Cetera! You don’t have to stretch your imagination to breaking point to realize just how profoundly such a hit song could have rewritten the band’s future!

The recording of the album was great, and Ron Nevison did an amazing job. A real pro. We had a lot of strong material for the album, so we were all excited. We sure felt that we had expectations to live up to trying to follow up such world phenomena as the The Final Countdown, but in the midst of recording an album, it’s not what you’re focusing on. We went with “Superstitious” for the first single, and everyone felt happy with that. I was using my Tommy Folkesson-modified Marshall JMP amp, and together with Ron Nevison’s ingenious tweaking, we created a legendary guitar tone. With its timbre reminiscent of a woodwind instrument, it became known as the “flute sound.” To this day, I daily get emails with questions about this guitar tone.”

You can read the rest of the interview with Kee Marcello at Vinyl Writer Music‘s website.

Europe‘s “Superstitious” video (from Out of This World album):