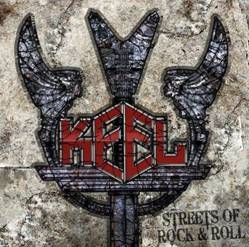 KEEL – the band that gave you “The Right To Rock” – will unleash their brand new album “Streets Of Rock & Roll” ” on January 29th 2010 in Europe and February 9th in the USA on Frontiers Records.

The new recording contains twelve new rock anthems in the tradition of KEEL’s classic “The Final Frontier,” “KEEL,” and “Lay Down The Law” albums: commercial Hard Rock featuring the twin-guitar attack of Marc Ferrari and Bryan Jay, drummer Dwain Miller and bassist Geno Arce’s rock solid groove, Ron Keel’s powerful vocals, and a collection of songs which the band feels is their best ever.

“We are not re-inventing our style – “Streets Of Rock & Roll” is a perfect follow-up to our previous albums,” says Ron Keel presenting the new album. “The only real evolution is in the quality of the songwriting, musicianship, and production; the excitement and energy of the reunion really ignited our creativity and Marc, Bryan, and I were able to collaborate as a songwriting team like we’ve never done before. One characteristic this album shares with our classic releases is diversity – there are power anthems, relentless metal, and commercial hard rock. Some of the songs are designed to make you pump your fist and stomp your feet, some have lyrical content that is a little deeper and aims for the heart. There is a power ballad, “Does Anybody Believe” which I think is an instant classic and will be a very important song for us, one of those rare compositions that capture magic and translates it into words and music.”

KEEL first exploded onto the scene when “The Right To Rock,” their major label debut produced by Gene Simmons of KISS, became the fastest-selling debut album in A&M Records’ history. Frontiers Records will commemorate the 25th anniversary of this historic release with “The Right To Rock: 25th Anniversary Edition” simultaneously with “Streets Of Rock & Roll”. This newly remastered edition adds two bonus tracks: “Easier Said than Done (Remix)” and a newly recorded version of the immortal Metal anthem “The Right to Rock” ( MP3 sample). For this recording, KEEL invited their fans to participate via the internet – KEELaholics could download a guide track, sing along with the chorus, and send in an MP3 to be blended with the all-star chorus of the song which also features Paul Shortino (Rough Cutt, Quiet Riot), Lez Warner (The Cult), Ron Mancuso (Beggars & Thieves) and other members of the Las Vegas rock scene (even Graham Russell from Air Supply joined in)!

KEEL has sold over 2 million albums, garnering a reputation as one of the genre’s most entertaining live acts by touring with/opening for Bon Jovi, Van Halen, Aerosmith, Motley Crue, and many more. They were unanimously hailed as 1985’s “Best New Band” in publications such as Circus, Metal Edge, and Hit Parader, and released three charting albums which spawned radio & MTV hits such as “Because The Night,” “Tears Of Fire,” “Somebody’s Waiting” and of course “The Right To Rock.”

In 2009 KEEL returned stronger than ever with festival appearances across the U.S. at Rocklahoma, the M3 Festival, the South Texas Rock Festival, and the MidWest RockFest in addition to sold-out headline shows in Hollywood and Phoenix. The excitement and energy of these shows and the fans’ response fuelled the creative fires that spawned “Streets Of Rock & Roll” and led to the band’s union with Frontiers Records. “We’re working on festival dates in the U.S. and Europe for 2010 and we’re ready to rock when opportunity knocks” explains Ron, adding “I can’t emphasize enough how much depends on sales – the more copies of “Streets Of Rock & Roll” and “The Right To Rock: 25th Anniversary Edition” we sell, the more attractive we are to concert promoters and venues who can help us get back on stage where we belong – so we’re hoping that fans of commercial hard rock will embrace these albums and add them to their collection.”

“The feeling in the band is triumphant,” concludes Ron Keel. “We’ve been back together for over a year now, we’ve got some great shows under our belt, and the new album is finished and ready for release. We are thankful to all the fans for the incredible response to the reunion, and we’re very proud of our new music. We can move forward with the confidence that we’ve accomplished a lot of our goals and done it on our own terms.”

KEEL is confident that Hard Rock fans everywhere are going to feel right at home on the “Streets Of Rock & Roll”, and plans are underway to promote this new release with shows around the world in the year to come.