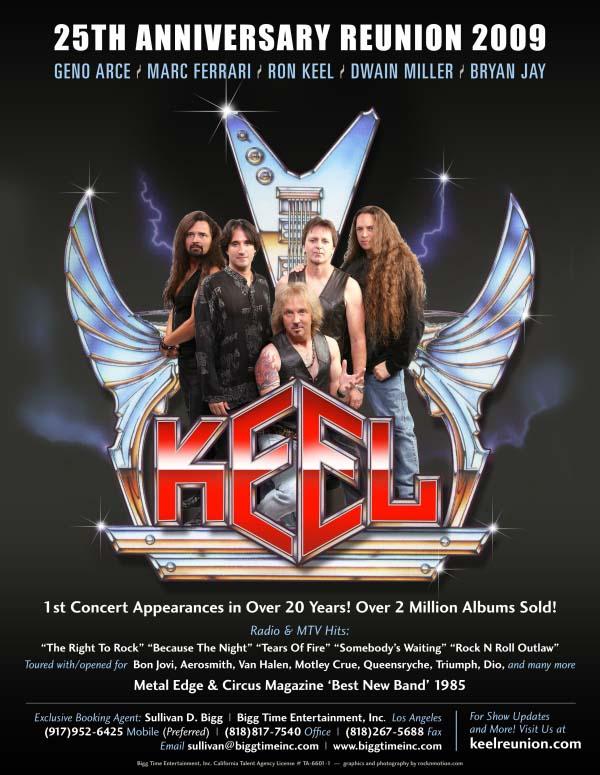 2009 will mark iconic metal band KEEL’s 25th anniversary, and the passing of two decades since the original lineup played on stage together. Unlike most of their contemporaries, none of the members has ever performed as KEEL since 1989.

Ron Keel, guitarists Marc Ferrari & Bryan Jay, drummer Dwain Miller along with Geno Arce (Ron’s long-time bassist) are preparing to perform again for the first time in 20 years. “It would not have been right without these guys,” expresses Ron Keel. With the high volume of requests for the band to reunite, the members felt the time is right to deliver the show fans everywhere have been demanding: a KEEL reunion.

In 1985, “The Right To Rock” became the fastest-selling debut album in A&M Record’s history. Selling over 2 million albums the band was proclaimed the Best New Band by Metal Edge and Circus Magazines.

The title track was a hit on radio & MTV and remains a staple on VH1 Classic, in addition to the group’s subsequent hits “Tears Of Fire”, “Because The Night”, “Somebody’s Waiting”, and “Rock & Roll Outlaw”. They developed a reputation as one of the genre’s most entertaining live acts, opening for heavyweights like Bon Jovi, Aerosmith, and Van Halen amongst many others.

Plans are for KEEL to reunite at a select number of festivals and showcase dates in 2009 to perform all their hits and classic favorites in celebration of 25 years of rock n roll history. The KEEL “Debut Reunion Concert” will take place in Hollywood on Saturday, January 31st. The location for this historic event will be Club Vodka at The Knitting Factory. See the left sidebar of KeelReunion.com for this and other show details.