L.A. Guns (feat. Riley and Nickels) bassist Kelly Nickels was interviewed by Steve Mascord for the White Line Fever podcast back in or about November 2020.

Back in September 2018, Lewis had been interviewed by the White Line Fever podcast during which he stated that both Nickels and former L.A. Guns guitarist Mick Cripps had been asked but refused to take part in the band reunion involving Lewis and guitarist Tracii Guns. Nickels posted a message on Facebook on September 10, 2018 simply stating that “We were not asked….!!!” 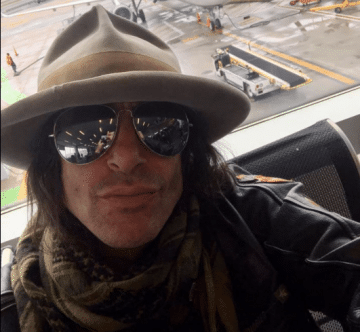 “Nonsense. I have your number in my phone. I called and asked if you’d be willing to help me work on a song and your response was “That songs beat (crap) and it’s all or nothing if you want my help.

Not only would you have lasted less than a week away from your privileged lifestyle. You couldn’t hold a candle to Johnny Martins playing.

You’ve got a minute of attention. Enjoy it and crawl back under the stone from where you came.”

Nickels recently indicated that he understood Lewis‘ “privileged lifestyle” comment to be a reference to one of his daughters who is a  Hollywood actress.

The bassist stated (as provided by the White Line Fever podcast):

“You know, that was rude.

“I have a daughter who acts and stuff and she does pretty well but that doesn’t really reflect on my life that much.

“Actually, they never asked us to come back. So when Phil and Tracii (Guns, guitarist) had their reunion, I asked if I could come back.

“I thought it would be a good idea if I came back. My youngest daughter was going to college so I figured I had some time now. He made it clear: ‘no man’. They didn’t want me back.

“They didn’t ask Mick and the definitely didn’t ask Steve (Riley, drummer) They had a little two-man reunion. It’s kind of like the catalyst of all of this.

“For us to have been in the band during it’s heyday thing and Steve always has been doing it for the last 25 years or so and having the legal right to have the name, that’s how we kinda got here.

“‘Cause they didn’t want us.

“You are part of something but part of it doesn’t want you in it, so what are we supposed to do? Are the rest of us supposed to sit back and do nothing and just let them go and have a good time?

“It didn’t really work out that way so now we’re here too. We’re here to stay.”

In terms of his work and lifestyle outside of the classic line-up of L.A. Guns, Nickels indicated:

“I raised a couple of girls and had to figure out other things to do… I’ve taught some music, I’ve worked on a shark cage diving boat for a few years, I’ve done construction, I’ve worked in a garage, I’ve done all kinds of stuff to stay busy.”

You can listen to the interview with Kelly Nickels on the White Line Fever podcast below: