Earlier today, Sleaze Roxx published an article titled “Nikki Sixx recalls Randy Rhoads asking him if he would be interested in playing bass in Quiet Riot.” the article was derived from a recent interview by Metal Edge Magazine with Mötley Crüe bassist Nikki Sixx. 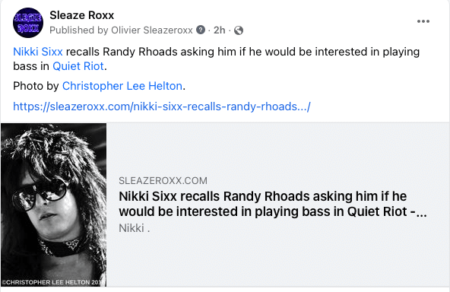 The article was subsequently posted on Sleaze Roxx‘s Facebook page and less than an hour later, the following comment was inexplicably left by Quiet Riot: “This never happened.”

Quiet Riot then went on to post a link to the Sleaze Roxx article on their own Facebook page with the following comment: “All lies. Sleaze Roxx has no credibility. This never happened.” 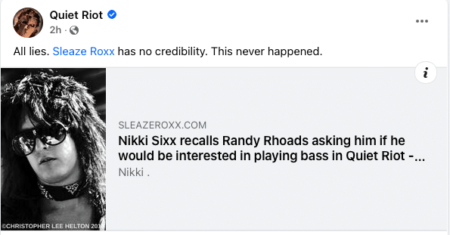 Let’s keep in mind that when Randy Rhoads was in Quiet Riot, and based on Wikipedia‘s chronology, the original line-up was Kevin DuBrow on lead vocals, Rhoads on guitar, Drew Forsyth on drums and Kelly Garni on bass from 1975 to 1978. Bassist Rudy Sarzo, who recently returned to the Quiet Riot line-up after an 18 year absence, only joined the band in 1978. DuBrow passed away of a cocaine overdose in November 2007 while Rhoads was killed in an airplane crash almost 40 years ago.

Although Sarzo is currently in Quiet Riot, odds are that he wasn’t privy to all of the bass players that DuBrow and/or Rhoads considered to replace Kelly Garni back in the late ’70s. 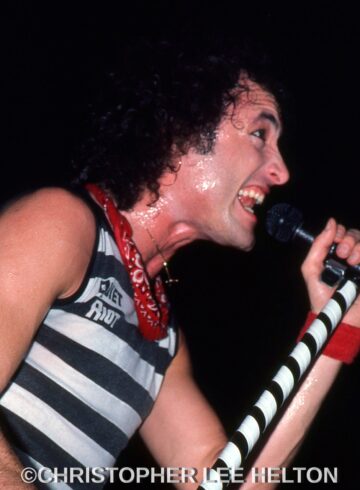 Let’s consider who is running Quiet Riot at this time. It is apparently the deceased Quiet Riot drummer Frankie Banali‘s widow Regina. Frankie Banali and Regina Russell married less than seven years ago on November 11, 2015 (as per Wikipedia). In addition to Sarzo, the Quiet Riot line-up consists of guitarist Alex Grossi (who first joined in 2004), singer Jizzy Pearl (who first joined in 2014) and drummer Johnny Kelly (who replaced Banali in 2020). Clearly, none of these five individuals can speak to whether or not Randy Rhoads asked Nikki Sixx if he would have been interested in playing bass for or even joining Quiet Riot back in the late ’70s.

However, DuBrow gave an interview to Full In Bloom just prior to passing away in November 2007 where he stated:

Kevin DuBrow: Well, Quiet Riot predated London by years. London was around the same time as Dubrow. But remember that Nikki auditioned for Quiet Riot when Kelly (Garni) left in ’77.

Kevin DuBrow: No. We predated these bands by at least four or five years; long years, let me tell you.

Full In Bloom: Was Nikki any good at that time?

Full In Bloom: He was terrible?

Full In Bloom: But he actually sat down and jammed with you guys?

Kevin DuBrow: No. Not really. We said, “The song is in the key of F,” and he said, “Where’s F?” So we couldn’t get as far as jamming to be honest with you.

Original audio from excerpt from interview by Full In Bloom with Kevin DuBrow: