Sad news as Kickin Valentina have announced that they have parted ways with long-time singer Joe Edwards who handled the lead vocals on the group’s albums Kickin Valentina (2013), Super Atomic (2015) and Imaginary Creatures (2017).

The following message was posted about an hour ago on Kickin Valentina‘s Facebook page: 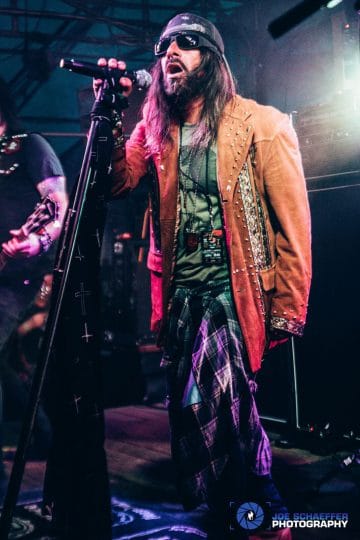 “The below statement was going to go out tomorrow, but Joe has decided to say something today. We aren’t going to get into any drama over this, name calling or acting like children, but the German run has been booked for a while, and he decided to tell us last night that he wasn’t going. You can take “quitting” or getting “fired” however you want. Joe, we wish you luck man….

Due to circumstances way beyond our control, we are disappointed (to say the least) that we will not be leaving for our German tour today. We would like to apologize to everyone with the Bang Your Head Festival, Souls of Rock, the promoters/venues involved, and especially our fans who were planning to attend the shows. Many of whom have planned to travel long distances, and spend a lot money to be there. Please stay tuned to our facebook page over the next day or 2 about a member change within the band.

“Well… kicking Vantina has kicked me out of the band. After writing every lyric on imaginary creatures minus devils hand. And telling them for months about my busines failing and them witholding bank acct information and paying 5 grand to go play 3 shows. I get this. Just because i couldnt go to germany this wk jimmy has also kicked me out of the house.if your band kicks you out becsuse you have to provide for your kid…that says alot about their character.”

Sleaze Roxx stated the following in its concert review of Kickin Valentina‘s impressive performance at Sleazy Slimey Sunday 3 held at the Cancun Cantina in Hanover, Maryland, USA on May 6, 2018:

“I was really interested in seeing Kickin Valentina play live because they are a bit of an anomaly as an American band touring quite a bit in Europe the last few years. In addition, I had missed them last year while vacationing in Florida. The two hour drive each way to catch the band’s set with an anticipated midnight start time turned out to be too much of an obstacle at that time. Finally, while I really liked Kickin Valentina‘s debut self-titled EP as well as their Super Atomic EP, I wasn’t as into their latest full-length album Imaginary Creatures. Sometimes, you need a live show to really get you into a band’s music and I was wondering whether that would be the case with Kickin Valentina. Obviously, a good portion of Sleaze Roxx readers really like Kickin Valentinasince their latest record did finish at #12 on the Sleaze Roxx Readers’ Top 20 Albums of 2017. From what I understand, Kickin Valentina are the only band to play all three inaugural editions of Sleazy Slimey Sunday and I could tell from various Facebook posts that the event’s organizer Brad Lee was really into the band.

There seemed to be a big crowd for Kickin Valentina right off the bat. I am not sure how many people were there given that I was standing in the second row determined to give a chance to Kickin Valentina to impress me with their live show. And that’s exactly what they did! The group came out rocking right from the start and never really let up. Lead vocalist Joe Edwards was seemingly flanked by two giants — bassist Chris Taylor and guitarist Heber Pampillon — but still caught everyone’s attention with his sometimes wacky stage moves.”