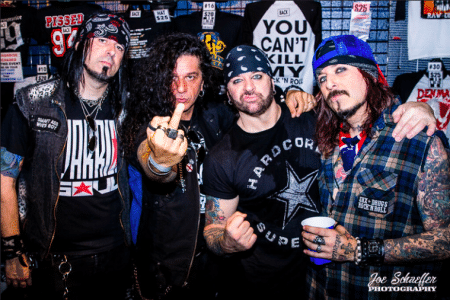 In terms of what is on the horizon, Kickin Valentina advised (with slight edits): “2020 is going to be busy…. We will go into studio to record a new full-length album due out late summer / early fall. Nine tunes! And, we will also be doing tons of shows kickin’ it off in South Florida, Feb 7th at O’Malleys in Margate, Florida, just north of Fort Lauderdale. Then a bunch of East coast dates thru April. May, we are in Europe for three festivals (Nordic Noise in Denmark, Wildfest in Belgium, and Call of The Wild in the U.K.) plus an additional 15 to 18 club dates. June, July — a few more US dates — then August, we are back in Europe and UK  for two festivals (Rhön Rock in Germany and Hard Rock Hell Sleaze U.K.) plus club dates. End the year, in the States! Busy!”

Sleaze Roxx stated the following in its review of Kickin Valentina‘s recent EP Chaos In Copenhagen: “Apparently, the story of this quickie EP is that, shortly after the band renewed their record deal with Mighty Music, the company asked if they wanted to head into the studio during a day off touring. Kickin Valentina had already been writing for a new album, and jumped at the chance to get something on tape. After a 14 hour day in Denmark, the result is Chaos In Copenhagen… an appetizer for a full-length main course in 2020.”