Kickin Valentina had previously announced that they had found a temporary lead vocalist (Joe Flynt of Asphalt Valentine) to fill in for all remaining shows aside from the three Germany shows that they had to cancel due to the departure of long-time frontman Joe Edwards. As it turns out, Kickin Valentina will be canceling five more shows that were scheduled to take place in the UK from September 27, 2018 to October 6, 2018. 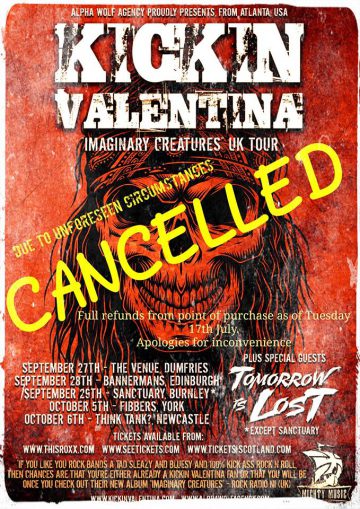 After very careful consideration and close talks, it is by mutual agreement that the following Kickin Valentina UK tour has been cancelled.

Much has been publicised regarding Joe‘s sudden departure from Kickin Valentina & while the band were eager to uphold their commitment to the UK dates, we strongly feel that the band require time to regroup and come to terms with the currentsituation and not make any rash decisions.

Full refunds will be made via point of purchase.

Kickin Valentina posted the following message in part on their Facebook page yesterday:

“Please see below for info regrading upcoming UK tour. This is not something that we or our agent wanted to do, but we all feel it’s better to postpone the tour for now.

There has been so much time and work put into these 2 tours by our agents and promoters only to have it wasted, and we thank them for sticking by us. We understand your frustration, and we apologize to our fans that were expecting to see us.