Atlanta, Georgia, USA based rockers Kickin Valentina have announced the details for their IndieGoGo campaign to raise funds for  their forthcoming new studio album The Revenge of Rock. 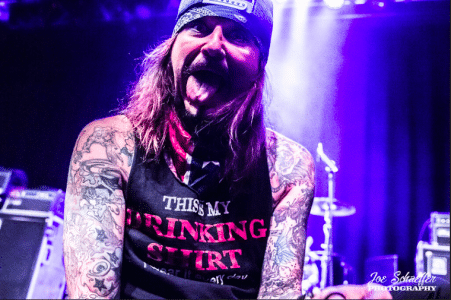 About three and a half years ago, Kickin Valentina launched an IndieGoGo campaign where they raised $6,085 US of their $10,000 US goal. This time around, the band has already raised $2,223 US of their $10,000 goal. Perks that are available this time around range from CDs for $15 US to signed guitars for $500 US (for people located in continental US only) to spending a day on the road with Kickin Valentina for $3,000 US.

Over the past seven years, we have developed a very loyal and supportive fan base all over the world.  For the making of our 3rd full length album “The Revenge of Rock,” and accompanying video, we want you to be a part of the process, and thank you by putting your name in the album credits.  Through this campaign, we are offering some exclusive merchandise items and perks that you can ONLY get here, and they will never be made available again. By pre-ordering our next release, you are helping us fund the making and promotion of it.  We are aiming for a January 2021 release date.

We want to thank everyone that bought our previous releases, have supported us by coming to shows, and telling friends to check us out.  Everything we’ve been able to do as a band has come from your support and belief in what we do.

By pre-ordering the album now, it will help us fund the making of it, our accompanying video, and the PR campaign behind it.  We want to make this process fun by offering merchandise items and perks that will be exclusive to this pre-order campaign, and will NOT be made available again.  Some of the perks/merchandise items we’re offering are:  your name listed in the album credits, exclusive T-Shirt/Vest/Hoodie/Patch designs, private concerts, one of a kind memorabilia and much much more.

This campaign will only run for 60 days, and after that, these exclusive items will no longer be made available, so get in on it now!!

If you do not want to buy any of the packages now, but still want to support the making of the album, there are 2 options to donate, and 1 of them will still get your name in the album.  Or, you can just simply share this campaign link on your social media pages to show support.

Once again, we thank you for your love and support!  We can’t do this without you!