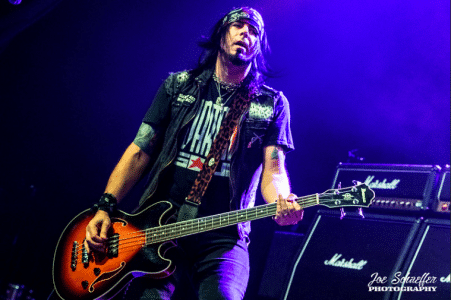 Atlanta, Georgia, USA based rockers Kickin Valentina‘s bassist Chris Taylor was recently interviewed by senior columnist Alexandra Mrozowska for Hard Rock Haven. Kickin Valentina just released their new studio album The Revenge of Rock two days ago (on January 22, 2021). The group were able to raise some funds for the new record through an IndieGoGo campaign.

Taylor stated the following in that regard: “The campaign did really well for us. We raised twice as much money for this album as we did for the last one – we had [a campaign] for Imaginary Creatures as well. So, we think it did really well. And to be honest with you, when we first started talking about doing an Indiegogo campaign to get people to donate money, I wasn’t in love with the idea. One of the things that we did to kind of make it cool – and I know a lot of bands do this too – is that we made exclusive merch designs that they can only get through that.

So I think it ended up being like a cool experience and a lot of fans liked it from the first time that we did it. They thought that it was awesome that there were limited edition items and things that they could get only through that. When we did it for the first time, a lot of people came back later and they were like, “Oh, I saw someone wearing this shirt, but you guys don’t have it in your merch store, so how can I get it…?” And we were like, “Well, it’s only available through that [campaign].” So we tried to make it fun and to get people exclusive perks and merch that they’re not gonna get anywhere else except through the campaign. But my opinion on them, honestly, has kind of come around. I think they’re a good thing and something bands can do and have fun with their fans and like I said, get some exclusive items to them.”

You can read the rest of the interview with Chris Taylor at Hard Rock Haven‘s website.