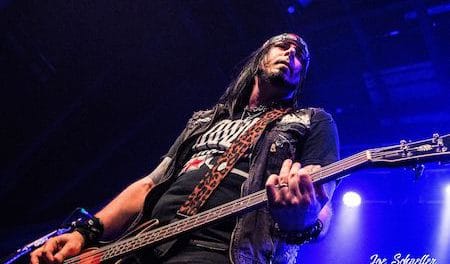 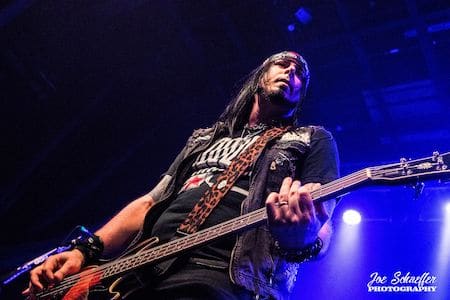 Taylor was asked what has been his shining moment career wise that he will never forget to which he replied: “I have actually been fortunate enough in my life that I’ve gotten to open for, tour, and work with bands that influenced me early on….with KV and previous bands. Out of everything, the one thing that makes me the happiest is being on stage and hearing the crowd sing our songs back to us. No better feeling.”

In terms of what motivates him to keep creating music that may not get heard, Taylor advised: “The music business is generally in a shit place right now, and has been for a while. There are so many good bands out there, and you will never hear them on the radio. This scene has gone back underground. In some ways, I think it’s good that it has. Bands are able to do what they want without the filter of a major label watering them down for the masses. The bad part of that is you really have to work hard to break through the clutter to get your music to fans. What motivates me is the fact that I love what I do.”

“Next up was the hometown Atlanta favorites — Kickin Valentina. The band has undergone a lot of changes since I first saw them play live at the Sleazy Slimey Sunday 3 in Hanover, Maryland, USA in early May 2018. Gone is the band’s long-time and original lead vocalist Joe Edwards after the latter bailed on the group just as it was about to head to play the Bang Your Head Festival in Germany back in July 2018. In addition, gone is Edwards‘ first replacement Brian Bezotte who apparently misled the rest of the Kickin Valentina guys on his availability when joining and who eventually quit after only five shows. Even though Kickin Valentina definitely experienced some line-up issues and uncertainty, it appears that they finally found their man and an experienced one at that in former Jetboy frontman DK Revelle.

Kickin Valentina seem to be a regular feature of any substantive Brad Lee Entertainment event so it was no surprise to see Brad Lee introduce the band to the Rocklanta audience. Just like at Sleazy Slimey Sunday 3, Brad Lee‘s wife Angi Krempel was there as well standing in the photographers’ pit and at times with her back to the band like if she was singing to the crowd. Clearly, Mr. and Mrs. Brad Lee really like Kickin Valentina. And really what is there not to like? In the weeks prior, Kickin Valentina drummer Jimmy Berdine had communicated with me via Facebook that “we will come out swingin… that’s a promise.” Well, that’s exactly what they did and now they had a frontman that could really lead the band and connect with the audience. Now don’t get me wrong, I love Joe Edwards‘ voice and even give him a slight edge over Revelle in that department but there was no comparison when it came to their live performances. Revelle is a born frontman covering the whole stage, getting the audience to participate and generally being the social host that a good frontman is supposed to be. The way each singer handled Kickin Valentina‘s trademark song “Get Ready” illustrates the differences between the two in a live setting. At Sleazy Slimey Sunday 3 during “Get Ready”, Edwards tried to get the crowd to repeat some complex screams after him, which didn’t work out too well, while Revelle was able to get the Rocklanta audience to repeatedly scream the easy two words “Get Ready” with great success.”