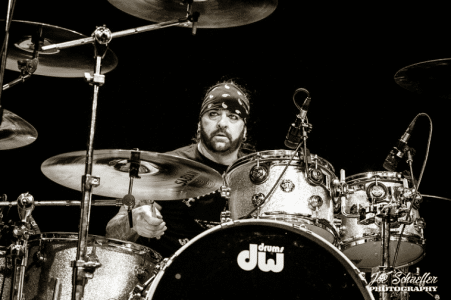 Atlanta, Georgia, USA based rockers Kickin Valentina consisting of lead vocalist D.K. Revelle, guitarist Heber Pampillon, bassist Chris Taylor and drummer Jimmy Berdine appear close to finishing writing songs for their next studio album. The group already has 11 or 12 new songs written for the follow up to their critically acclaimed album The Revenge of Rock, which finished at #2 on the Sleaze Roxx’s Top Ten Albums of 2021 and #11 on the Sleaze Roxx Readers’ Top 20 Albums of 2021.

The following message was posted in part on Kickin Valentina‘s Facebook page yesterday:

“Just wanna give you a little update on what’s going on in our world. Right now we are trying to finish up writing for our next album. I think we have about 11 or 12 songs finished so far. The new songs are sounding awesome, and we’re excited for everyone to hear them. Plan on demoing everything in Dec to send off to Mighty Music. From there we will narrow it down to what’s gonna go on the album. Hope to be in the studio in Jan to start tracking everything. We don’t have an exact date yet, but we’re aiming for a fall release.

Show wise, we’re at Dixie Tavern in Atlanta on Dec 16 for our last show of the year…..there may be some surprises in the set for this one. We have a private event we’re doing in Italy in late Jan. Then we are headed back to the UK in May for the Call Of The Wild Festival with more dates around that coming soon. Couple other things we’re waiting to see if they come through or not, but our main focus is getting the new record finished.

Kickin Valentina‘s “War” video (from The Revenge of Rock album):