Atlanta, Georgia, USA sleaze rockers Kickin Valentina have posted a video today of the band rehearsing with new singer Brian Bezotte. The group is playing “On My Side” from their Super Atomic EP first released in 2015. 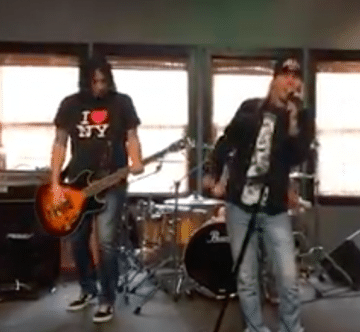 In terms of why Bezotte decided to join Kickin Valentina, the singer advised: “It’s just opportunities you know? So I took advantage of the situation and everything, all the cards played out pretty right and here we are. So I love rock n’ roll and just want to get myself out there rocking with some good guys.”

In regard to whether Kickin Valentina are working on a new album, Taylor chimed in: “Yes, we are. We are actually writing right now and tonight, we send him back home. And then, and then we finish writing some stuff and we’re going to demo it and send it to him. And then next time he comes down, we’re gonna start the process of writing it all together. And yes, we are working on a new album. We are writing. We’ve got a bunch of new ideas already together and I don’t want to say yet when we’re going to go in the studio or anything like that.”

Kickin Valentina‘s rehearsal video with new singer Brian Bezotte playing “On My Side”: