Atlanta, Georgia, USA rockers Kickin Valentina consisting of lead vocalist D.K. Revelle, guitarist Heber Pampillon, bassist Chris Taylor and drummer Jimmy Berdine have released a new single titled “End of The Road” from their upcoming new studio album The Revenge of Rock, which will be available via Mighty Music / Target Group on January 22, 2021. You can pre-order the album via Target Group‘s website. 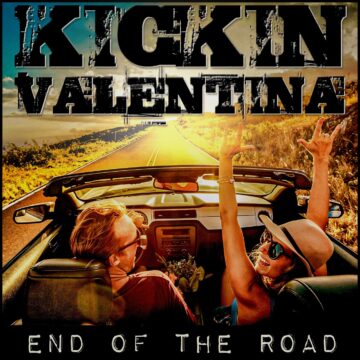 Kickin Valentina‘s EP Chaos In Copenhagen finished at #20 on the Sleaze Roxx Readers’ Top 20 Albums of 2020 to which Sleaze Roxx stated:

“Kickin Valentina came back strong in 2019 after a drama filled latter part of 2018. That year, they had to deal with the abrupt departure of long-time lead vocalist Joe Edwards after the singer elected not to attend the prestigious Bang Your Head Festival only a few days before the group was to board a plane to fly over to Germany. The remaining band members ended up recruiting a temporary fill in singer (Asphalt Valentine‘s Joe Flynt) for a bunch of gigs. Later on, they announced their new lead vocalist (Stradlin’ Rosie‘s Brian Bezotte) who ended up sticking around for only a handful of months. Finally, in early 2019, Kickin Valentina announced that former Jetboy singer DK Revelle would be handling the lead vocal duties. As it turns out, Revelle was on the short list of guitarist Heber Pampillon and drummer Jimmy Berdine when the duo started the band many years ago and it appears that they finally got their man! If 2019 is any indication, Revelle has turned out to be the right choice as the kings of EPs’ third EP Chaos In Copenhagen was able to squeeze into the Sleaze Roxx readers’ Top 20 albums of the year despite only having three new studio songs. One can only imagine how well that Kickin Valentina would have done on the readers’ year-end list in 2019 had they released a full-length record.”