Atlanta, Georgia, USA sleaze rockers Kickin Valentina have released a video for their new song “Crazy” from their latest studio album Imaginary Creatures, which was released back on August 11, 2017. 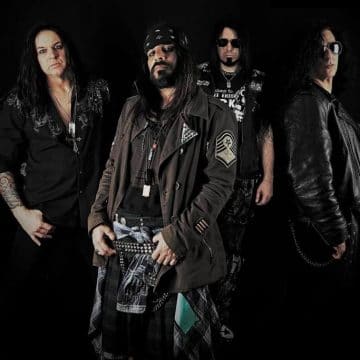 Sleaze Roxx stated the following in its review of Imaginary Creatures: “Enough hype… I like the Kickin Valentina release — a lot! Hearing influences from Whitesnake to Cinderella, there really are some killer deep cuts on Imaginary Creatures. “Heartbreak” for example, drips with attitude and gives a solid performance from all instruments. Some tracks, like “Burning Love” drop into Little Caesar territory — kind of punk meets a ’50s sensibility. But hell, “Eyes”, “Turn Me On” and “Devil’s Hand” offer me a great hard rock experience. “Eat N Run” stands out for me as a fantastic song that I would love to see live sometime. I’m feeling pretty solid on recommending Imaginary Creatures. It’s a must have for those that appreciate a new spin on what us ’80s guys now refer to as a classic “sleaze rock” sound. Again, think of some of the newer bands that Sleaze Roxx targets. This album is the real thing.

With five and a half months left in 2017, it is entirely possible Kickin Valentina could end up in my annual top 10. Skid and Olivier weren’t wrong. Imaginary Creatures has lived up to Sleaze Roxx‘s estimations of this band, going back to 2014. Gotta love consistency!”

“Crazy” is taken from the album “Imaginary Creatures” out now world wide on Mighty Music (ex. Japan by Bickee Music).Buy the LP and CD here www.targetshop.dk…