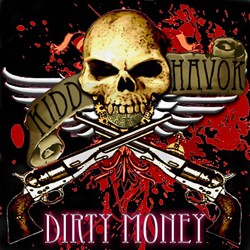 Florida hard rockers Kidd Havok have returned with ‘Dirty Money’, a collection of songs originally written between the band’s formation in 1989 and their break-up in 1994. ‘Dirty Money’ is available as a digital download at Amazon.com and iTunes.com and the band is streaming the song “Back Door Man” exclusively at Sleaze Roxx.

Kidd Havok was formed in late 1989/early 1990 by guitarist Scot Marcs and singer Johnny B Gyles. The band went through several line-up changes over the next few years, but due to a powerful live show they gained a considerable following. Their 10 song demo gained them radio airplay on both coasts as well as several TV appearances and features in national magizines such as LiveWire, Powerline and Metal Edge. Scot and Johnny called it a day sometime in 1994, but in 2006 Suncity Records offered them a chance to put out the original Kidd Havok demo — resulting in 2007’s ‘Roll The Dice’.

“Since ‘Roll The Dice’ came out we have had some great opportunities”, Scot Marcs tells Sleaze Roxx. “We played a ton of great show on big stages and it, for the most part, was fun again. We had a two CD deal with Suncity Records and started throwing around ideas about a live CD or an EP, but we really wanted to do a full length album. Between shows and real life things coming up the recording kept getting delayed. Finally we went in to start the bed tracks and then it progressed pretty quickly. We turned in the CD in November of 2010 but Suncity disappeared after that. I talked to a bunch of folks who wanted to put it out, but doing it ourselves just made more sense — the day of the record label is over.”

“The songs on ‘Dirty Money’ were all older songs that were already written”, continues Marcs. “We had about 60 songs to pick from and we always had people asking for “Dirty Money”, “Poor Side Of Town” and “Dead And Gone”, so those had to be on there. We always wrote the same way back in the day — I would bring in the music or riff and we would tighten it up at rehearsals, then John would write lyrics and sometimes we would suggest a title or a chorus, etc. Then we would work on the arrangement and then we would make a 4 track of the song. Some of the old demos still sound pretty damm good! It was fun to record again, but its very different now. You don’t all record at the same time anymore. The way we hear music now is very stiff — since everything is perfect, because of ProTools, I think it loses some of its vibe.”

“I think Daniel (my engineering partner) and I did a pretty good job on this… or least we tried like hell! We just really wanted these songs to be heard!”