Kik Tracee will be releasing their first album in more than 25 years in the shape of B-sides, demos and rarities entitled Big Western Sky, which will be released on July 17, 2017. 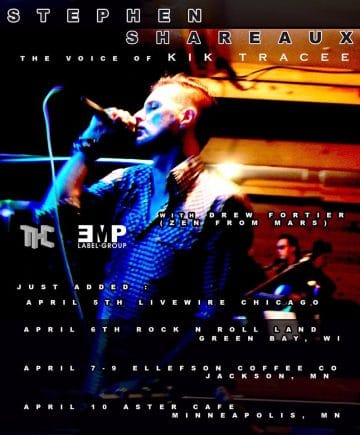 “Disbanded 90’s LA hard rockers Kik Tracee have announced the release of Big Western Sky, a collection of B-sides, demos, and rarities being released 7/17 via THC Music/EMP Label Group/Amped. Big Western Sky features early demos and rarities from the bands classic No Rules/Field Trip era, prior to disbanding in the early 90s.

Vocalist Stephen Shareaux will do a run of acoustic dates in early April, accompanied by guitarist Drew Fortier, who plays with Shareaux in All-Star troupe Zen From Mars, which also features Chip Z’nuff, with members of Flipp and Fear Factory. This will mark one of the first live performances of Kik Tracee material by Shareaux in over 20 years. The dates start in Chicago on April 5th, with additional dates in Green Bay, Minneapolis, and a performance at the Grand Opening of Megadeth’s David Elelfson’s Ellefson Coffee Co. in Jackson, MN.

Says singer Stephen Shareaux, “After al these years. Why a Kik Tracee release now? The timing just felt right. We’ve been sitting on these songs for what, 25 years now? Kinda pulled them out recently, and listened to the stuff, and thought.. You know.. Let’s package this stuff and put it out there for the diehard fans to relive the glory days, if you will. Or just get their Kik Tracee on, man.”

“As for how it all came about, myself I have been working with Drew Fortier on Zen from Mars, or ZFM, and we had been working with Thöm Häzäert from EMP.. THC and EMP had been involved in the ZFM release, and in doing that, Thom said, “hey man.. do you guys have any Kik Tracee stuff? Leftover B-Sides, demos, curiosities..” And I was like well yeah, we have tons of stuff.. Demos, B-Sides. Live shows. Etc.. And he was like, “Dude, let’s put it out.” And that’s pretty much how this whole 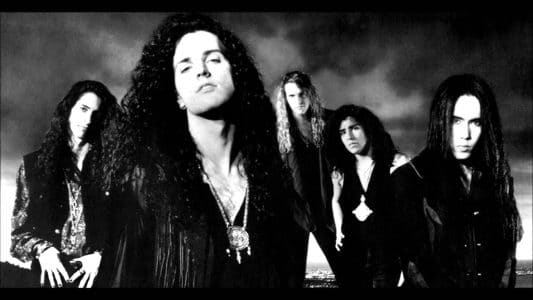 thing came about. So thank Thom Hazaert. Or blame him. Whatever.”

Kik Tracee formed in LA in 1988 by guitarists Greg Hex and Michael Marquis, bassist Rob Grad, and drummer Scott Donnell (who was later replaced by Johnny Douglas) eventually recruiting Minnesota transplant Stephen Shareaux to be the band’s vocalist. The band signed to RCA/BMG and recorded their Dana Strum (Slaughter) produced debut No Rules, that quickly became a fan favorite, (with the band being prominently featured in the Rock Press, and finding some success with their singles “Don’t Need Rules” and “You’re So Strange” which landed just outside of the Billboard Top 40 (and No Rules landed at #46 on Rolling Stone’s “Best Hair Metal Albums of All Time”).

The band veered left for their follow up, 1992’s Field Trip EP, produced by “Godfather of Desert Rock” Masters of Reality’s Chris Goss, who would go on to produce influential records for Kyuss and Queens Of The Stone Age. Field Trip showed the band moving in a direction away from the LA Hard Rock of its predecessor, and into the more eclectic alternative direction the band had originally intended for No Rules.

After recording their second full length, the unreleased Center Of A Tension, with producer Garth “GGGGarth” Richardson (Rage Against the Machine, Mudvayne) Kik Tracee disbanded in 1993, with Shareaux becoming a contender for not only the vacant vocal spot in Motley Crue, eventually filled by John Corabi, but a frontrunner for the vocalist position in Velvet Revolver, as documented in the documentary “The Rise of Velvet Revolver”.

Shareaux released his first solo LP Golden independently in 2013, and is in the final stages of recording the debut LP from Zen From Mars.”