American rockers Killcode have released their video for the title track of their new album The Answer. 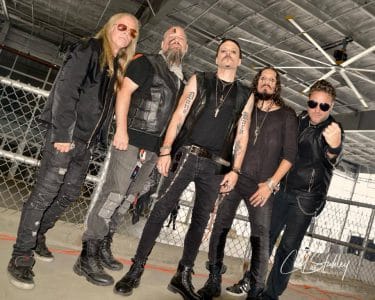 “American hard rockers Killcode announced earlier this week a release of three consecutive videos they are calling ‘The Trilogy’ from their current release “The Answer.” Today, they dropped the first in a series of three for ‘The Answer’.

The tracks used for the three videos are ‘The Answer’, ‘Put it Off’ and ‘Show Me’. David Swajeski started a creative relationship with Killcode when he heard the song “Breaking Away” and used it as a theme song in his film Dressed. Since that time, David has collaborated with Tom and the Killcode Crew on several music videos and a documentary project to aid the victims of Hurricane Maria in Puerto Rico. The Trilogy Collection marks a new cinematic and storytelling direction for the band.

Killcode fans have been asking for a new video and Killcode have delivered three fold! Delivering a sound of southern infused hard rock / metal with a modern vocal injection. Moving, energetic, passionate and riff driven rock that fans the world over have come to know and love.

“The Answer” is a musical and visual journey to seek the truth. Everyday we’re bombarded by words, pictures, music, noise, chatter, billboards, videos and text messages…information comes at us so fast. When we walk down the street we hear bites of cell phone conversations, advertisements and a constant montage of words and pictures. We are exposed to more information in one day then past generations had in a year. Innovation advances with every app update. Siri wakes us up, Alexis tells us our schedule and Google teaches us anything we need in a split second. We are surrounded by information overload. Can we cut through the clutter and what do the words really mean? What’s right, what’s wrong, what is true and what is false? Can we see the patterns and connect the dots?” – Tom Morrissey, Lead Vocals”

Directed by David Swajeski and Produced by Maryanne GriszKILLCODE’s album “The Answer” is now available for download at – https://itunes.apple.com/us/album/t…