Killer Bee have released a video for their cover of Ten Years After‘s song “I’d Love To Change The World” which is taken from their new album Killing You Softly, which was released in June 2016 and was produced and recorded by Kee Marcello (ex-Europe). 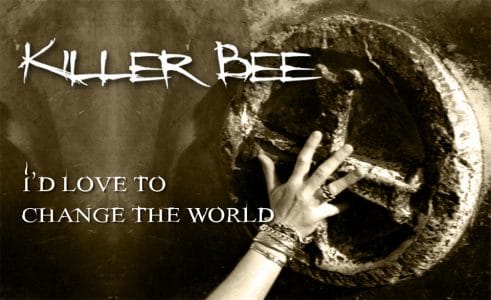 Killer Bee‘s bio on their Facebook page states in part (with slight edits):

“On a rampage through the 90’s with the release of 3 albums, 5 singles and as many videos, Killer Bee showed at that time that traditional hard rock of the truest kind never dies. Their bull headed approach and never say die attitude landed them shows all over the world between 1994-1998 from the Red Square & Olympic Stadium in Moscow, Super Rally – Harley Davidson Festival in Voralberg, Austria, Out In The Green, Brienzer See Festival, Broncos Festival, Pashanga Festival to name but a few in Switzerland together with artists such as Oasis, R.E.M, Elton John, Rod Stewart, Page & Plant, Megadeath, Peter Frampton and many more.. In May 1998 after a 6 month period in the Canary Islands, Killer Bee took a break, a break that would last 15 years and refuel the engines that propelled Killer Bee into action way back then… Well, now they’re back, hungry and stead fast.”