Killer Bee have released a video for their new song “Victorious” from their new upcoming album Remember The Times, which will be released in February 2019.

The band’s “Story” on its Facebook page states (with slight edits): 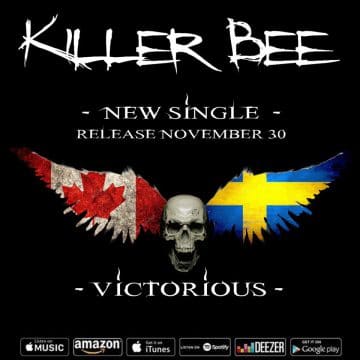 “Their bull headed approach and never say die attitude landed them shows all over the world between 1994-1998. Well, now they’re back, hungry and stead fast.

2011 – The release of “Almost There” was a self proclaimed salute to days gone by. A chance for the listener to hear a compilation of songs that best represented them from their earlier releases. This CD opened the eyes of past fans and sparked a new driving force which led the two towards this new era of Killer Bee.

2012 – “From Hell And Back” a suitably titled comeback album was released throughout Europe and across the web. Well received with a positive response, the album was followed by no less than five videos to the songs All Night Long, Step Into My World, I Believe, Footprints In The Sand and finally From Hell and Back. The videos distributed online received an enormous near 1,000,000 combined hits.

2013 – One year later hot on the heals of From Hell And Back, Killer Bee once again delivered a new kick-ass album – “Evolutionary Children” followed by the videos “Children Of The Evolution” and “Scream It”. Once again, the band received great response around the world.

2015 – The official launch of the Killer Bee in North America with the release of “Rock Another Day” and the addition of guitar legend Paul “Tonka” Chapman (formerly of UFO, Skid Row, Lone Star, etc.). Killer Bee embarked on a nine week tour of North America taking them across the continent playing a total of 40 cities in 35 states and parts of Canada. As 2015 winds down, Killer Bee are currently in Sweden putting the finishing touches on their newest record with expectations of a release in early 2016.

2016 – It’s an open calendar. Tours are being planned now for North America, Europe and Asia. The latest album ”Eye In The Sky” was released in October through Mighty Music/Target Group preceeded by singles ”Joystick Warrior”…. “Get On Board”…. “Shout It Out” This is the band’s sixth studio album, and it received great reviews around the world with lots of radio play-

2017 – In March, the band went on a two week UK Tour with the Swedish band Bonafide and the Aussie chicks Tequila Mockingbyrd. It was a great success throughout England, Wales and Scotland. In the beginning of November, the band played in their hometown Örnsköldsvik and started to record their seventh studio album.

2018 – Holds the 25 Year Anniversary of Killer Bee. A CD called “Tapes From The Attic” will be released. It will include previously never released songs. In May, the band entered BMP Studios in Stockholm and mixed the new upcoming album with the first single planned to be released November 30th. The full length album is planned to be released January 2019! The road that lies ahead is wide open and that’s where you will find Killer Bee. Wide open full throttled pedal to the metal rocking in a city near you.

First Single from the upcoming Album “Remember The Times” due to release February 2019 on Freedom Records Sweden.SPOTIFY: https://open.spotify.com/album/6X7D…