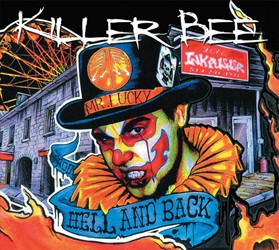 Killer Bee Return With ‘From Hell And Back’ On October 22

Z Records has signed the Swedish/Canadian act Killer Bee and will release their return album ‘From Hell And Back’ on October 22nd. Helix guitarist Brent Doerner will guest on two of the album’s tracks, “On And On” and “Step Into My World”, and the band is planning to film two videos for the album.

Killer bee founder Anders ‘LA’ ROnnblom commented, “We’re really happy to sign with Z Records. With their many years in the business we are confidentthat they are the right choice for us… We’re lookin’ forward to work together and rock the world!”

Its been 15 years since Killer Bee’s last hurrah.. and now they are back. The band have previously releasedfour full length CDs (one under the name Desert Rain) and in the fall of 2011 they released a collection of their popular rockers from the 90’s on the CD ‘Almost There’. For all intent and purposes in the 90’s they were just that… almost there.

This new international 5 piece line-up is solid and determined. The release of their 5th CD, to be called ‘From Hell And Back’ will be released by Z Records on October 22nd. Killer Bee are here again ready todeliver their melodic hard rocking music. The new sounds, new songs and matured writing styles of Ronnblom/Frank promise this CD to be a welcomed continuation ofthe journey that started oh so long ago and which will undoubtedly continue oh so long to go.

For more information on Killer Bee visit www.killerbee.se and www.facebook.com/OfficialKillerBee.