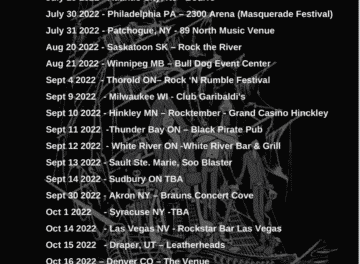 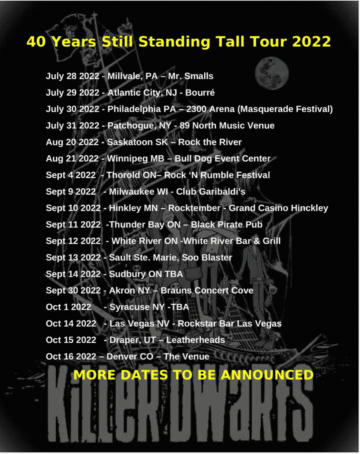 Sleaze Roxx stated the following in its review of the Killer Dwarfs‘ New Year’s Eve show at The Rockpile in Toronto, Ontario, Canada on December 31, 2018: “I was impressed with the Killer Dwarfs band members’ enthusiasm while playing their show. All of them really looked like they were having a lot of fun up there. It was fun to see Graham and Finn joke around with bassist Johnny Fentonadvising him that he should not address the audience until he had reached ten years in the band. Graham also took the time to thank the crowd on a number of occasions for all the support that had been given to the Killer Dwarfs over their 37 year history.

While all the songs played by the Killer Dwarfs were good, they unfortunately played seemingly the same set in the exact same order once again. In fact, if you look at the song order for the live record Live No Guff!, you’ll see that the Dwarfs played the exact same setlist in the same order at The Rockpile on this night except that they omitted “Start @ One” and “Burn It Down.” There was one song that I wasn’t overly familiar with but I am going to assume that the song played after the sing along classic “Doesn’t Matter” was the track “Can’t Lose” from the Dwarfs‘ debut self-titled album. I am puzzled why the Killer Dwarfs don’t use a trick from Helix‘s playbook and simply completely switch the order of the songs played from time to time. “Doesn’t Matter” would be great as one of the encore songs. Not every set has to start with the double of “Comin’ Through” and “Hard Luck Town.” In any case, as soon as “Driftin’ Back” was played, I could pretty much tell you which song would be played next.”