The Killer Dwarfs band members reside in the province of Ontario in the country of Canada, which continues to have some of the biggest restrictions in the world to combat the Covid-19 pandemic. The province of Ontario implemented a “Stay-At-Home” order on April 8, 2021 which mandates that people must stay at home and should only go out for necessities, such as: the grocery 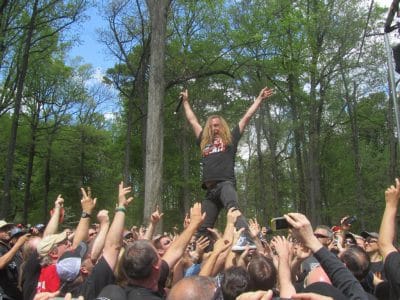 store or pharmacy, health care services (including going to medical appointments or getting vaccinated), outdoor exercise or walking pets in your community, work that cannot be done remotely, and child care or school. A number of specific rules regarding gatherings have also been put into place including people are not allowed to gather indoors or outdoors with anyone they do not live with, except one other person from outside of the household that lives alone. People must stay at least two metres apart from everyone else and wear a mask or face covering during permitted events such as a wedding, funeral or religious service, rite or ceremony. Failing to follow these rules for gatherings can lead to organizers getting fined a minimum of $10,000, each attendee receiving a $750 ticket, and enforcement personnel can break up the gathering or temporarily close the premises.

The following message was posted on the Killer Dwarfs‘ Facebook page earlier today:

“Thank you to all of our fans inquiring about our participation in this year’s M3 Rock Festival. Unfortunately due to Covid and travel restrictions between Canada and the US we have had to postpone this year’s performance. With respect for both our fans and the great people who run the festival we felt it better that we made the decision prior to the announcement. It would not be fair to take a chance and hope travel restrictions are lifted by that date. We are always excited to be a part of this great festival and as such we are equally disappointed that we are unable to attend this year.

We miss you all and hope to see you all very soon.

Enjoy this great line up!!!! 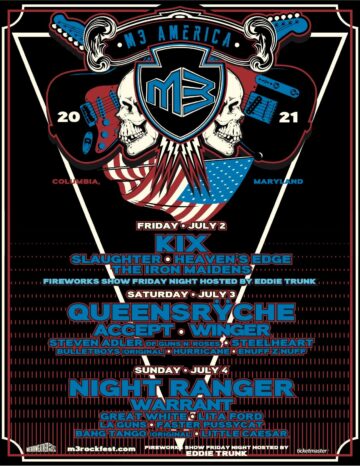 Sleaze Roxx was in attendance for the Killer Dwarfs‘ first ever appearance at the M3 Rock Festival back in 2015 and stated in its concert review:

“To make matters worse for Bad Seed Rising, the band scheduled to open the side stage was the Killer Dwarfs who were making their much anticipated debut at the M3 Rock Festival. There was literally a sea of people as far as my eyes could see waiting prior to the Dwarfs hitting the stage (and while Bad Seed Rising were still playing).

This takes me to the Killer Dwarfs. Having already seen them play live a couple of times in the last few years, I knew what the Dwarfs were capable of. It never gets old for me to see the Killer Dwarfs‘ 50 year old (or so) lead singer Russ Dwarf ride a tricycle, do head stands and surf the crowd, and the diminutive frontman did not disappoint. That being said, although the Killer Dwarfs have their share of stage antics due to their lead vocalist, it is the music that counts at the end of the day and the Killer Dwarfs have a multitude of great songs to choose from. I was actually curious to see which songs they would end playing considering that they only had 30 minutes to play. It seemed that there was a real buzz in the crowd to hear and see the Killer Dwarfs play. The Dwarfs hit the stage with “Comin’ Through”, one of my favorite songs of theirs. Russ Dwarf was walking around like a seemingly deranged patient from a mental institution before he started singing the song. The big smile on guitarist Gerry “Dwarf” Finn‘s face spoke volumes of how the band likely felt while playing its set.

Given that the group only had 30 minutes to play, frontman Russ Dwarf kept the chatter to a minimum although he jokingly addressed the crowd by saying “Hello Cleveland” and acknowledged to a fan that he knew it was drummer Darrell “Dwarf” Millar‘s (50th) birthday. I am sure that had the band had more time to play, Millar‘s 50th birthday would have been acknowledged a lot more by Russ Dwarf. The band’s signature ballad “It Doesn’t Matter” was played early on as the third song of the set and had a large portion of the crowd singing along. I was particularly pleased to hear the band play “Stand Tall”, for which the band made a hilarious video for back in the day. Given that the sight lines for the side stage were quite poor for anyone not in the first two rows, it was awesome to see frontman Russ Dwarf do his traditional crowd surfing and even cooler to see him literally stand on top of the crowd. There is only one Russ Dwarf — that’s for sure! In addition, not only did Russ Dwarf do his traditional head stand and ride a tricycle (I can’t even imagine sitting on one with my feet on the pedals) but this time around, he smashed his tricycle to smithereens. The tricycle’s destruction must not have been planned because manager Rob Zakojc was seen afterwards initially trying to put the tricycle back together from the side of the stage. The Killer Dwarfs closed their too short set with their anthem “Keep The Spirit Alive” and the strong “Dirty Weapons”. The Dwarfs put on an amazing performance and set the bar nice and high for the next acts to follow.”

Killer Dwarfs performing “Dirty Weapons” at the M3 Rock Festival at the Merriweather Post Pavilion in Columbia, Maryland, USA on May 2, 2015: