Killer Dwarfs frontman Russ Dwarf and drummer Darrell Dwarf were interviewed by Alan Dixon of Canada’s The Metal Voice at the Piranha Bar in Montreal, Quebec, Canada on April 6, 2018. The two long-time bandmates spoke of the 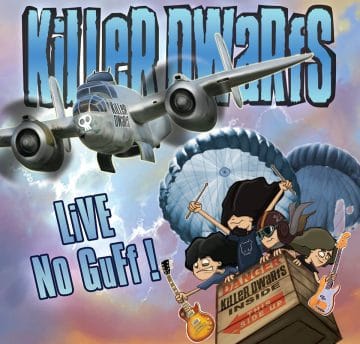 In terms of the new live album, Russ Dwarf stated (as transcribed by The Metal Voice with slight edits): “The new live album comes out April 13, 2018. It’s a live album called Live No Guff that we recorded a few years back in Canada in four cities –Toronto, Ottawa, Vancouver and Whitehorse.” Russ Dwarf continued: “All the classics will be on, something from every album is on there, this live album is just a stop gap because we have to deliver a new studio album next year 2019 for EMP.”

When asked whether the band is starting over again, Darrell Dwarf opined: “All we do is go through hiatuses, we have been together 37 years and we really never break up but we roll through the times and sometimes call them hiatuses and we go to other projects. We have been back touring for a solid five years. Every year, we do at least 20 shows.”