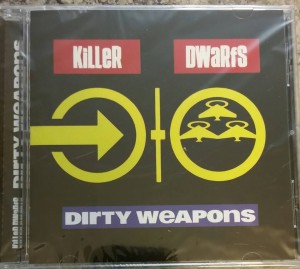 Canadian rockers Killer Dwarfs announced yesterday that they have released a new re-issue of their 1990 classic Dirty Weapons.

Quantities are extremely limited since there are only 75 copies that are available at this time. The new re-issued Dirty Weapons can be purchased at the group’s Bandcamp page.

The Killer Dwarfs have been known for their quirky humour throughout the years such as all the members surprisingly going by the surname of Dwarf. Lead singer Russ Dwarf only stands in at about 5’4″, but the rest of the band is rather tall despite rumours that you had to be under a certain height in order to join. The Killer Dwarfs arose from the ashes of vocalist Russ “Dwarf” Graham and drummer Darrell “Dwarf” Millar‘s club bands in Toronto, Ontario in late 1981. Rounded out by Bryce “Dwarf” Trewin (guitar) and Ange “Dwarf” Fodero (bass), the band released their self-titled debut album in 1983. It would be three years before the follow-up was released; due in part to Bryce and Ange leaving because they thought the band was likely going nowhere. They both left the band in 1984 to be replaced by Mike “Dwarf” Hall and Bad Ronbo Dwarf Mayer.

1986’s Stand Tall saw the band make inroads, with help from the hilarious videos for “Stand Tall” and “Keep The Spirit Alive” and by 1988, the Killer Dwarfs were signed to a major label. 1988’s Big Deal and 1990’s Dirty Weapons would prove to be the band’s commercial peak — with the song “It Doesn’t Matter” from the latter album having some rock radio success — as both albums reached the Billboard charts. Hall would leave to be replaced by guitarist Gerry “Dwarf” Finn on the studio release, 1992’s Method To The Madness, which failed to find much of an audience due to the grunge era and the band was dropped from its label. In or about 1995, the Killer Dwarfs were put to rest before reforming in 2001 with the classic Big Deal line-up. In 2002, the Killer Dwarfs released a live album called Reunion of Scribes: Live 2001 before disbanding once again. The band finally reformed again in 2013 for the release of Start @ One with Russell Dwarf, Darrell Dwarf, Gerry Dwarf and new bassist Johnny “Dwarf” Fenton.

Sleaze Roxx stated in its review of Start @ One: “The Killer Dwarfs are back… and that is great news for fans of sleaze rock and heavy metal! Start @ One was supposed to be the Killer Dwarfs‘ sixth album back in 1993, unfortunately, with the grunge movement gaining tremendous momentum and wiping out various labels’ interest in a lot of metal bands at that time, the disc never saw the light of day.” Sleaze Roxx added: “Not only are the Killer Dwarfs finally releasing their ‘lost album’, but the original master tapes were digitally remixed and re-mastered to get the sound up to industry standards twenty years later. The end results are exactly what fans have been longing for — classic hooks with the inimitable singing of Graham. Start @ One is not as strong or as commercially accessible as the Dirty Weapons album, when the band hit their pinnacle, but it is still a solid CD from start to finish.”