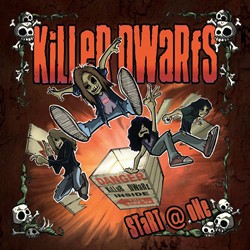 The band, who formed in late 1981, recently revealed the CD’s artwork and are selling the disc at their reunion tour dates — a full itinerary can be found at russdwarf.com. The CD will be available worldwide via iTunes, Amazon, Spotify and all other distribution channels in the near future.

The tracks on ‘Start @ One’ were recorded in 1993 at Powerlines Studios in Toronto, Ontario, with producer/engineer Fred Duvall. Fred also recently produced and recorded the very successful Russ Dwarf acoustic release ‘Wireless’. The album’s line-up of Russ Dwarf, Darrell Dwarf, Ronbo Dwarf, and Gerry Dwarf is the same as the band’s prior Sony/Epic release ‘Method To The Madness’ in 1991. The original master tapes were digitally remixed and re-mastered for this release, which marks the 20th anniversary of the recording of this never released album.

Work is also currently under way on a documentary movie on Russ Dwarf’s life and career tentatively titled ‘Tall Tales’, which should be released in 2013/2014 as well as a book version to follow.

‘Start @ One’ track listing:
Lonely Road
Solid Ground
Sky is Falling
Adelina
Psycho Circus
Start @ One
Down in Hollywood
Walk on By
The Crowd
Plus two new bonus tracks that were written just for this release