London, England based KilliT have released their debut album Shut It Down.

Back in November 2015, Knox commented to Sleaze Roxx about KilliT‘s debut album: “The album will come out in February 2016. [I am] not sure of the exact date yet but its pretty much ready… It’s a full length 12 songs album full of masterpieces if you ask me! The people involved in the production of this album have a really good feeling about it too. The producer, Phil Kinman of MTR Studios, has done an incredibly amazing job capturing our sound. It’s amazing how this album sounds!”

In May 2016, KilliT released a video for their new song “Crash And Burn.” 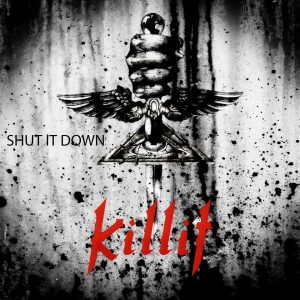