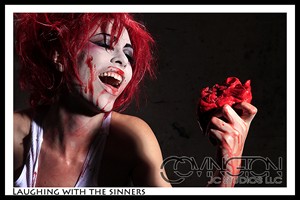 Henzerling, who handles guitars, keyboards and bass in Steelshine tells SleazeRoxx.com, “I’ve had this project (Steelshine) brewing in my head for some time. This new song is part of a ten song collection that I’ll be releasing one-per-month, aggregating all into a complete album towards the end of the year. There’s a lot of diverse stuff coming up, but I believe there’s a cohesive thread weaving through all the songs. It’s been a great privilege working with my good friend John Covington on drums again and with stellar vocalist Seann “Tarsha” Nicols.”

“”Laughing With The Sinners” borrows heavily from my days listening to Led Zeppelin LPs, mixing some psychedlic Jimi Hendrix in for good measure (“Third Stone From The Sun”…?)”, continues the guitarist. “Seann really kicks ass on this one. The lyrics are a by-product of my repressed Catholic upbringing, but with hopefully enough tongue-in-cheek entendre to not make things too intense. Hope you like it and thanks for listening.”

Henzerling has played in Keel, Lizzy Borden, Big Cock and Tunnel, but is best known for his work with King Kobra under the name David Michael-Philips. King Kobra recently reunited and released their self-titled comeback album on May 10, 2011 through Frontiers Records with new vocalist Paul Shortino of Rough Cutt fame.