King Of The Hill playing show in Missouri in November 2018

It appears that King Of The Hill are now playing concerts at least once per year as the band will be playing a show at the Delmar Hall in St. Louis, Missouri, USA on November 9, 2018. 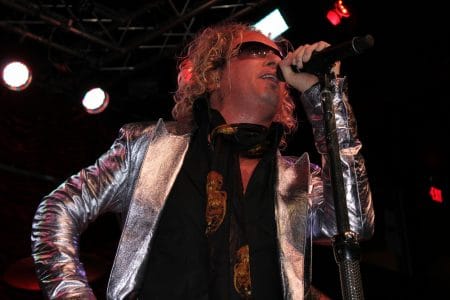 All Music states the following about King Of The Hill:

“This St. Louis, Missouri-based four-piece heavy metal outfit began life on the local club circuit as a covers band, with the line-up settling when bass player George Potsos joined Frankie Muriel (vocals), Vito Bono (drums) and Jimmy Griffin (guitar). Initially known as Broken Toyz, the band gradually introduced original material into their set, until the demand for their own songs allowed them to drop the cover versions entirely. They signed a recording contract in 1990, and, having adopted the name King Of The Hill, recorded their self-titled debut with Bang Tango producer Howard Benson. The album mixed party metal in the grand Van Halen style with funk influences, while also touching on AOR, with vocal harmonies that echoed Bon Jovi. The opening single, ‘I Do U’, did well on MTV, and with major backing from their record label the band spent much of 1991 on the road, touring with White Lion, Trixter, Lynch Mob and Steelheart in the USA, and received a rapturous reception as Extreme’s guests on their autumn UK tour. This, the band’s first live work outside their own country, served to sharpen their performing abilities, with the charismatic Muriel becoming the visual focus of the band, drawing comparisons to both David Lee Roth and Prince, not least for his multiple costume changes throughout each show. However, despite the fact that King Of The Hill were due to record a second album in early 1992, they seemed to disappear almost overnight.”

The following message was posted on King Of The Hill frontman Frankie Muriel‘s Facebook page yesterday:

“We had such a blast after so many years seeing all of you !! We are doing it again!! If u missed it last year was more than us reuniting it was like a Stages Granny’s Missisippi Nights Furst Rock and All American saloon Reunion !! See u in November !!! Get your tix before it sells out !

This Page Is Not Available

Our apologies, the page you are looking for is not available or cannot be found.

Sleaze Roxx caught King Of The Hill‘s performance at the Rock N Skull Festival back in late October 0216 and stated in its Day Three review of the festival: “One band that I had never heard of before that I did check out prior to heading to Rock N Skull was King Of The Hill. Their jazzy rock songs reminded me a little bit of Extreme and I was curious to see them play live. King Of The Hill‘s singer had an eccentric look to him with a bright silver jacket, scarf and big curly hair. The singer was definitely full of energy. I can’t say that I was particularly enamoured by King Of The Hill‘s songs but I did love hearing their cover of Alice Cooper‘s classic “Is It My Body” from the stellar Love It To Death album.”

King Of The Hill – I Do You