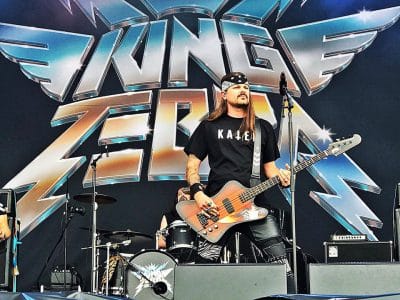 “Dear friends, we’d like to thank Michael for 7 unforgettable years. Our and Michael‘s journey goes on and we’ll keep you posted about news. Currently working on our new album and can’t wait to share..

Sleaze Roxx stated the following in its review of King Zebra‘s Wild!Wild!Wild! (2015), which featured Mutter on bass along with an entirely different line-up: “If you were to close your eyes and play King Zebra‘s new record Wild!Wild!Wild!, you would most likely think that this album was made sometime back in the mid to late ’80s and perhaps it had just been recently re-released since the production is better than back in those days. The melodies, sounds and hooks on the record are all reminiscent of that golden era in glam hard rock / hair metal. As it turns out, King Zebra are a fairly new band emanating from Switzerland of all places — which is not exactly the hotbed of rock and roll except perhaps in the eyes of Krokus — and Wild!Wild!Wild! is the group’s second full length studio release.”