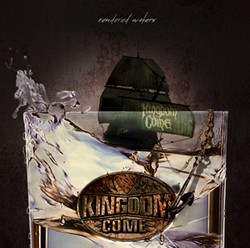 It is not the success of the early days which Lenny Wolf associates Kingdom Come with, nor earlier hits from his long-standing career. What he really cares about is the present. Is this a contradiction in view of his new album Rendered Waters (out on April 5 in North America, March 25 in Germany and March 28 in Europe), which features eight old and three newly recorded songs? Certainly not, all eleven tracks were cut at Lenny’s Two Square Noise Factory studio in Hamburg, Germany. In particular, the new recordings of old material show Kingdom Come’S vision of living in the here and now.

“I purposely chose tracks from the very early days to show how we play, hear and feel the songs nowadays,” says Wolf. “Listening habits have changed dramatically, especially among the younger audience, which made it exciting for me to breathe new life into numbers which have not been heard for a while.”

For example “Should I”, this time is played more slowly lending it a heavier appeal. The drums are more open and the guitars, according to Lenny, feature a more tube-oriented sound and warmer, more driving tone: “Just to give it an overall 2011 vibe. Of course, you can only change songs to a certain extent if you don’t want to lose the character and central theme of the original version.”

The same goes for “I’ve Been Trying”, “Pushing Hard” and “Living Out Of Touch”. None of them have been reinvented, but all three certainly have a noticeable new approach to them. On the other hand, Lenny changed the verse of “I’ve Been Trying” completely, giving it a different arrangement, just like he transported the song “Seventeen” into the year 2011. “Seventeen” has always been kind of a key song for Kingdom Come, yet it has never received much attention since it has a very non-commercial approach and is either loved or hated, but with the new version it will hopefully get the recognition it deserves.”