Kings of Dust have been busy in the last two months or so. Back in early March, the group announced that it had parted ways with original lead vocalist Michael Beck. During the beginning of April, the band revealed its new singer Ken Ronk. Now mid-way through the month of May and Kings of Dust, consisting of Ronk, bassist Greg Chaisson (Badlands, Red Dragon Cartel), guitarist Ryan McKay and drummer Jim Taft will now be going by the name of Atomic Kings. 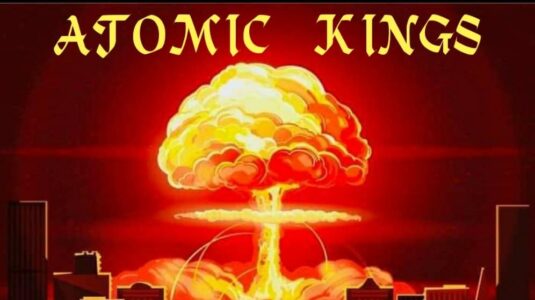 “Howdy everyone, so here’s what’s up… We have been thinking about changing the name for the last month or so.

We came up with something that we really like , so from now on Ken, Jimi, Ryan and yours truly will be known as “ATOMIC KINGS.”

We will still be playing some of the songs from kod live, but we will be focusing on a bunch of great new Atomic Kings songs as well! 

We are moving upward and onward and leaving all the drama in the dust!  …

You can find our new Facebook page Atomic Kings.

We will be the one with the fiery crown

Dog On It Productions LLC‘s press release indicates in part (with slight edits):

“Atomic Kings, are currently releasing in preparation for a ground breaking set of shows scheduled for the upcoming summer as well as a slot on one of fall’s biggest festivals in the Phoenix, Arizona area — Nomadfest2021. They are also working on new material which they hope to take into the studio for a possible late fall release on current label Hellaphonic Music from Hollywood, California and supported by global dates already in the works.”